Crowd control (commonly shortened to CC) is a blanket term used in League of Legends to describe abilities or spells that remove or diminish the control a target unit has over aspects of itself, including being able to cast spells and issue movement or attack commands. Crowd control effects are essentially specialized forms of debuffs. However, because they directly hinder a unit's combat ability, crowd control effects are often considered significantly more important than normal debuffs in regular gameplay, resulting in their special classification.

Crowd control can take many forms, each of which is unique in the ways it impairs affected units and the ways it can be resisted, mitigated, or cleansed, if at all. Most champions can apply the same types of crowd control, although through various means. However, some crowd control effects are exclusive to a few champions.

Many mechanics require a unit to be affected by specific forms of crowd control in order to function.

Crowd control effects that inhibit casting will only disable the following summoner spells:

suppression are exceptions to this rule and will prevent the caster from using any summoner spell.

All crowd control effects, with the exception of

cripple, will count toward assist credit, even if the ability they were applied from did not deal damage.

The following can be used even when casting is disabled by crowd control:

For the complete article, see Types of Crowd Control.

The following are the current forms of crowd control that exist within League of Legends:

The following mobility spells are interrupted / prevented by

The following interact with

To facilitate easier communications, crowd control effects are usually described under one of the following systems:

Crowd control effects are grouped into one of two categories depending on whether or not the effect removes total control of the champion.

channeled ability (such as

Disrupt will have the same interaction as hard disruption CC towards channels, but does not have a duration and thus is not a status effect.

Disruptive crowd control effects are also referred to as cast-inhibiting crowd control, which are those that disable casting.

Crowd control effects are grouped into one of two categories depending on whether or not the effect disables basic attacks.

Taunt only inhibit attack commands from being issued. They do not disable attacking altogether.

Increasing the duration of Crowd Control

It is possible for a unit to have negative tenacity, this causes crowd control to last longer. The following gameplay elements reduce a unit's tenacity:

Crowd control can be countered in various different ways.

Crowd control immunity completely negates any attempt at application of CC on the unit. Becoming immune does not prevent already-applied crowd control from imposing their effects, unless they were explicitly removed.

A unit with the immunity status will indicate that they "Can't Be Disabled!" or are "Spell Immune!" when they resist a crowd control effect, or specifically "Can't Be Slowed!" upon negating a

cripple effect with slow immunity. This indicator may not appear for some immunities.

The following abilities provide immunity to all forms of CC:

The following units are immune to all forms of CC:

Realm of Death, and

The following units are immune to displacement CCs:

EditUnstoppableForceMarker is a marker buff which is preloaded for all

Tempered Fate all interact with UnstoppableForceMarker.

Impale applies a small displacement to the target every 0.25 seconds whenever they are not close to

Skarner. These displacements do not apply

airborne and are not flagged as displacements, meaning that targets who are not

suppression are also never immune to the displacement either. As a consequence,

displacement immunity fails to ignore this movement. See the table below regarding

It is important to note that total immunity and displacement immunity are not distinguished by the in-game user interface to display statuses relating to crowd control above the health bar. Both read "Unstoppable" which only indicates the unit is immune to crowd control in some form. It should not be confused as being the same effect. 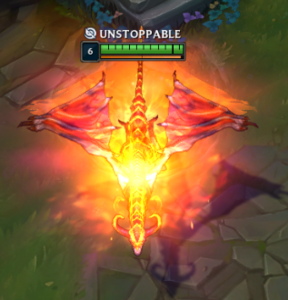 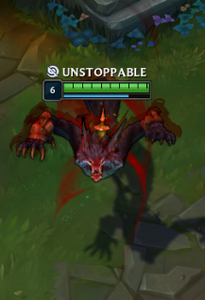 immune to all crowd control during

Infinite Duress, though not explicitly indicated.

EditSlow immunity is a status effect that prevents the application of

The following prevent the application of

EditCripple immunity is a status effect that prevents the application of

The following prevent the application of

While not specific to crowd control,

spell shields can be considered to provide pseudo-CC immunity against a single spell, but this is not guaranteed - abilities that do not interact with spell shields (such as

The following provide immunity to CC applied with the first instance of an applicable hostile ability:

crowd control can be

removed once they have been applied, with the cleansing spell itself not being disabled even while under the effects of

Suppression will disable all summoner spells, including

airborne can be removed by cleansing effects, but their forced movement cannot (which can be overridden by another displacement or a

The following remove all forms of CC:

The following remove some or most forms of CC:

Tenacity reduces the duration of crowd control effects by a percentage equal to its value. Sources of tenacity will stack multiplicatively or additively with each other, depending on the source of the tenacity.

suppression are not affected by tenacity and will always apply for their full duration.

This unofficial stat is unique to

slow resist reduces the effectiveness, or percentage, of slowing effects. Although it does not affect flat reductions in

The following effects are comparable to crowd control, except that the effect is caused voluntarily and affects the user/an ally rather than an enemy.

The casting time of an ability cannot be canceled by any means except death and prevents the caster from performing any other actions until the cast time is complete, unless otherwise stated. Certain summoner spells and item actives can be used during almost all cast times.

The channeling time of an ability, by contrast to a casting time, can be cancelled by disruptive CC. Channels can prevent their caster from performing certain actions and/or being able to cancel them, which is case by case. See Channel Interactions for more details.