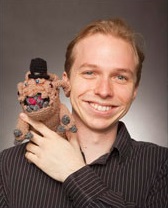 Colt 'Ezreal' Hallam is currently working for Riot Games Inc. as a Game Designer for an R&D project. He was one of the designers for the Crystal Scar, primarily focusing on adding features such as runes, summoner spells and items for the new game type. He made sure all the capture points were different.[1]

Colt hails from San Diego, California, where he grew up playing every competitive game possible. Over time, Colt's gaming tastes shifted from tabletop strategy games like Warhammer 40k to online competitive games like Starcraft. As a diehard DotA-Allstars fanatic, he has been playing Defense of the Ancients since its humble Starcraft beginnings in the Aeon of Strife map. Prior to coming to Riot, Colt graduated from the Claremont Colleges where he studied Psychology and Organizational Economics, all the while working on passion projects in game design including mods of Half-Life and Neverwinter Nights, or joining a pickup game of Ultimate Frisbee.

How a Champion Designer Watches Worlds