Clash is a competitive team-based tournament system that rewards players for organized play.[1]

The alpha tests premiered in late 2017 for Vietnam. An official beta launched on December 15th, 2017 onto EU servers, with team creation enabled prior on December 12th.[2] The original release date was set for May 2018, but due to frequent crashes and development issues, it was delayed indefinitely. On August 19-25, 2019, NA conducted another test[3], and the second official beta was conducted across two weekends of December 7–8 and December 14–15, 2019. The second official release date was February 22-23, 2020.[4][5] EU servers had their release dates pushed back for February 29th and March 1st due to another slew of server crashes.[6]

Entry into a bracket requires

Clash Tickets that can be bought with

195. A player can instead submit a

975 to be eligible for more prizes upon victory in the tournament. A player can also submit a ticket on behalf of a teammate without one.[7] 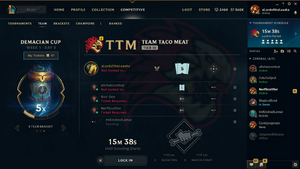 Teams are organized by a captain who decides the name, tag, and logo. The team's tier adjusts based on the rank composition of its members.

In case of emergency, a player can be substituted for a single day, but only after the lock-in phase begins. The substitute must be in the same skill tier, and may only submit one ticket. The substitute receives rewards normally, while the subbed-out player receives losing rewards.

If the team wins the bracket, the subbed-out player is reinserted into the team for following brackets.

The subbed-out player can reclaim their position on the roster before the scouting phase begins.

The entire team must lock-in within 30 minutes of match start; otherwise they will not participate, and their tickets will be returned. The game will start searching for a bracket immediately after all team members have locked in.

Teams are presented with information about the rival team to make decisions on pick/ban strategy. This phase lasts 7 minutes.

Champion select follows the tournament draft, where all champions are unlocked. There is a 22 second Pick Intent phase as the first phase.

A player that has not locked in a champion will be given a random champion, if not their hovered champion.

Matches are done in a 8 team bracket, i.e for 3 matches. 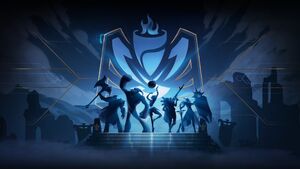 /pause and /remake are disabled in the Clash so matches cannot be overrun or be remade to prevent extended days of play. There's a potential for griefing or trolling through abuse of these features.

At 55 minutes, turrets lose their armor and magic resistance.

At 60 minutes, structures lose an escalating percentage of their maximum health every 30 seconds (turrets in order, then inhibitors, then nexus turrets, then the nexus).

At 70 minutes, one team will have won the game, decided by random if neither team damaged a structure. These measures are to keep match times at fixed lengths so operations are scheduled smoothly.

The winning bracket will reward the tournament trophy of the sized bracket.

Premium Ticket also gives extra VP. VP total up over two clash weekends. VP can be used to unlock team icons, and banners that will display in both the player's profile and their chosen lane on

Also, as players collect banners over the course of the season, they'll upgrade the appearance of the frame that holds the banner in place.

Exiting the tournament awards the player a Clash orb or capsule, depending if they bought the Premium Ticket or not, with prizes depending on their placement, with a guaranteed new Clash logo.

These are the default flags used.

Used in the Hextech Cup events.

Used for the Hextech Cup events.

Fight as Five. Win as One Clash - League of Legends
|

Retrieved from "https://leagueoflegends.fandom.com/wiki/Clash?oldid=3089335"
Community content is available under CC-BY-SA unless otherwise noted.