The Chirean are sapient species living in the sump levels of Zaun.

The first Zaunite miners to discover the chirean thought them timid, simple creatures. But as the years passed, and as they grew comfortable with humans, they slowly revealed their close societal bonds, and their seemingly native understanding of technology. Chireans cannot speak human languages as they communicate through chirps and clicks, but they do have a limited understanding of the spoken word.[1][2] Chireans possess an innate understanding of technology and greatly enjoy working on machinery, especially together.[3]

It takes a lot to upset a group of chirean, but when they get mad, everyone's gonna know about it.

The chirean are humanoids with the appearance of bats. Their hair and fur is ranges mostly from white, to grey, black, chestnut, though they have been seen with colorfully died hair. While they have 5 fingered hands, possess digitigrade legs that have feet with 3 toes. Chireans have inhabited Zaun for years to the point of evolving to survive in the hostile environment.[4]

Beneath their masks, they are shown to have humanoid like faces with two eyes, eyebrows, and mouths. Their noses resemble that of a bat. 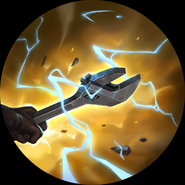