channel is a trait of certain abilities that causes the caster to become occupied for a period of time in which they must delay the effects of a spell to trigger them afterwards or maintain them over the duration.

Channels can be interrupted to cancel the spell entirely. The caster may be able to interrupt their channel by performing certain actions, depending on the spell.

All channels are interrupted by the following forms of

Disrupt is a special form of crowd control that specifically interrupts channels.

Movement channels, or those that cause the caster to move (by either

blinking or other forms of movement), are also interrupted by

ground. This may be case by case depending on the spell.

Objective channels, or those that require the caster to be out of combat, are also interrupted upon taking damage.

Channels can be set to not be interruptible, meaning none of the crowd control effects stated above would affect the channel's status. Note that entering a

resurrection state will cancel all ongoing actions, including channels. 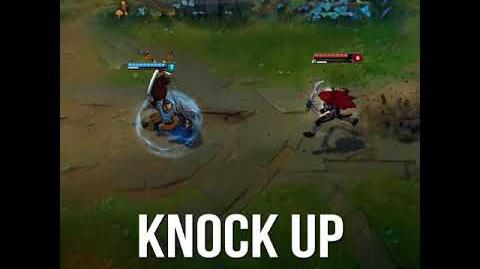 The following abilities and item actives do not interrupt channels by any means when they are used, except when the channel in question is cancelled by certain conditions (such as moving):

crowd control immunity to the caster during their channels, therefore they could not be interrupted by crowd control.

A charged spell has an active and a recast. The activation causes the caster to initiate a channel in which they charge up over a specified time during it as a means to increase the spell's effectiveness. The recast can be used to end the channel to trigger the spell's effects.

Charged spells will cancel if the channel's duration permits. If stated otherwise, the recast will be automatically used.

Charging is a sub-classification. The forms of crowd control that interrupt a charged spell depends on the type of channel.

The following channels cause the caster to be unable to cast some or all of their abilities and/or issue attack commands, but still allows them to issue movement commands.

The following channels cause the caster to become unable to issue movement commands, but still allows them to cancel the channel early by other means.

The following channels cause the caster to become unable to issue movement or attack commands or cast abilities, in addition to not allowing them to cancel the channel early.

In contrast to the above, the following channels do not necessarily prevent the caster from performing actions but will automatically cancel when they do so for all or certain actions:

Realm Warp is the only channel that does not disable any actions and prevents the caster from cancelling it early.

A majority of abilities and item actives have a casting time, during which time the caster cannot move, attack, or cast other abilities but will instead buffer them to be issued at the end of the cast time. Cast times will pause all previous actions until they complete, although some may interrupt them as whole.

Cast times cannot be interrupted by any means except by death. Anything occurring after the completion of a cast time will take place regardless of the caster's circumstance.

Note that spells may have both a cast time and a channel, with the former always occurring first. If the caster is unable to cast abilities when the cast time completes, the channel will not start.