You may also be looking for Summoner Mastery, a retired feature of the game.

Champion Mastery is a progression system which tracks a player's aptitude and experience with each champion.[1] At the end of every game, players receive a grade which scores their performance in comparison to the whole player base in that respective champion and position combination. These grades then translate into a point score which accumulates over time, eventually unlocking new Champion Mastery levels and flair as the player advances through the system.

The system was added in NA V5.6, eventually to all servers by V5.8. Champion Mastery is free for all players, Eternals was later added as a premium system of Champion Mastery.

The player is eligible for Champion points (CP) when they are at least summoner level 5, these are earned on matchmade games of:

After an eligible match, a given player receives a grade based on how well they performed in comparison to all other players in the region that have played the champion-position combination (e.g.

bottom lane will only be compared to other Vel'Koz bottom lane players).[2]

Champion Mastery is currently distinguished in 7 levels, the first 5 of which are attained at champion point threshholds. While a higher grade is worth more points, the amount of points gained is also influenced by team performance and party size (premade bonus). Team performance is affected by whether or not the team wins.

Premade bonus is awarded based on group size:[6]

The following describes the amount of Champion Mastery points required to go from one level to the next:

Upon reaching level 5, Champion point accrual will no longer advance mastery level. Levels 6 and 7 are instead earned through Hextech Crafting.[7]

Earning a S grade will reward a Mastery Token: a crafting component to access the next mastery level. These tokens can only be earned on matchmade

Each champion class has names for the mastery levels.

There are 7 levels of Champion Mastery currently obtainable, distinguished by crests. In addition, levels 4 and above have a Mastery loading screen badge and an in-game announcement banner, as well as an Emote (bound to its seperate hotkey).[11]

If a player earned Mastery Level 5, 6, or 7 during the 2017 Star Guardian event and equip either of the icons earned from the Invasion game mode, a player would receive a temporary Star Guardian-skinned Mastery badge emote for that tier that a player could flash across games until September 26th 2017.

Mastery Chest is an avenue of earning Hextech Chests for playing different champions. A player can earn 1 Mastery Chest every 7 days, storing up to 4 slots; this counter is shown in the Overview section of the Profile tab.

The Mastery Chest is given to a player that earns an S-, S, or S+ grade, all members of the player's premade party will also receive a chest. There remain a few conditions required for a player receiving a chest.

In the Champions section of the Collection tab, a champion's portrait will have an icon indicating the chest has been earned; the hover-over tooltip will also display this information.

A champion becomes ineligible after earning a chest, not after obtaining an S grade. 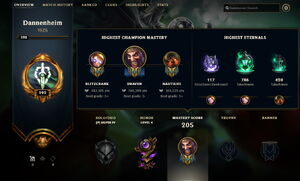 Champion Mastery is one of the achievements displayed in the Overview section of the Profile tab.[12] Displayed prominently is the champion with the highest score, the level, and the total mastery score (sum of all mastery levels achieved). The hoverover tooltip shows the top three champions' levels, scores, and highest grades.

Champion mastery is displayed in the portrait information within the loading screen.

In the post-game lobby, a text callout will notify the team if a player has achieved an S grade or a new mastery level (1-5).

These Portrait Crests were replaced in Champion Collection update in V9.17.

These Portrait banners for the loading screen were replaced in V9.3.