A capture point is an area in the game mode, Dominion. In Crystal Scar, there are 5 capture points. The capture points are located across the Crystal Scar and are the main objective of the game. The teams must compete for control over them. They act very much like a turret except they do lower damage and can be prevented from attacking. They can have one of three states, either blue, purple, or neutral, however the color of the teams is not shown. Minions can take control of a capture point by attacking it, however it will still attack. Stealthed champions or wards will be revealed near neutral or enemy capture points.

An allied capture point will attack enemy units like a turret, but the attack damage is weaker than the one in the classic mode, and will stop attacking when being neutralized by the enemy champion. This creates an opportunity for attackers to push defenders out from under the tower without taking tower damage.

Capture points represent important strategic locations across the map. The five points are laid out in the outer lane, which is a circular circuit with several points of entrance from the inner map and each team re-spawn area. The outer lane and the control points are permanently revealed to both teams at all times, regardless of who controls the points. Controlling these points and defending them against the opposition is the central focus of Dominion. When the capture point is not being channeled, it will slowly restore to its current state. Capture points do have a buff similar to

If a capturing champion moves, takes damage from an enemy champion, or if an enemy champion initiates his or her own capture during the channel time, the channeling will be canceled and a short cool-down period prohibits the capturing champion from attempting another capture. In the case that it is not fully neutralized or captured, if not being captured by minions or champions, it will slowly drain to the last state it was in. If the point has not been fully captured from neutral, it will not attack any units.

Garrison can enhance or weaken one capture point temporarily. A point allied to the caster is enhanced, and an enemy point is weakened.

Points controlled by the opposing team will take longer to capture, since they must first be neutralized before you can assume control.

Since minion attacks do not cancel the channeling, and you know all enemy champions are far away and your HP does not hit rock bottom, you can safely start neutralizing under enemy minions' attack. However, if the champion can kill a group of minions quickly, it is preferable to wipe them out first, because the presence of enemy minions at the capture point territory will slow the player's channeling progress. There is no way to interrupt a minion's neutralization or capturing, except by killing them or waiting until they die from capturing. Also, minions will gain a buff called 'Capture Fervor' increasing their armor/magic resistance while capturing.

To change the alignment of a capture point from enemy to neutral or neutral to allied with a single champion takes 10 seconds. Likewise for a single champion to bring a turret at full enemy alignment to his or her own, it takes twice as long. The more champions and minions, particularly the anti-turret cannon, join in on the channeling, the faster the progress will be, though with diminishing returns for each additional champion [diminished by how much?]. Likewise, the presence of enemy minions at a capture point will slow down the capture rate.

If the minion has arrived at the allied capture point without an enemy around, they will increase control of the point if able then simply die at the destination. Minions, in addition to their natural base stats increase over time (attack damage, armor, magic resist), will also gain small bonuses depending on the number of capture points currently held (needs confirmation/testing)

If you are capturing an enemy capture point, nearby minions will lose health and receive a buff called 'Capture Flavor'. Enemy minions will be forced to attack the point due to taunt and lose health every second.

Five capture points are situated alongside the outer circuit evenly. They are classified as "top" (Windmill), "middle" (Refinery and Drill) and "bottom" (Quarry and Boneyard) according to their latitudinal position. Clock position is also used by some players to indicate the position of each capture point: 12 o'clock (Windmill), 2 o'clock (Drill), 5 o'clock (Boneyard), 7 o'clock (Quarry) and 10 o'clock (Refinery).

In the current play style, bottom capture points are laned by one champion against another one of the opposing team. This role is usually assigned to the champion with best defensive and pushing attributes. One or two champions may capture the nearest middle capture point then rush up to the top to assist the remaining champions who have headed straight there. Because the top/Windmill is the furthest capture point to either champion re-spawn points, making it difficult for newly re-spawned champion to defend it when it is under attack. 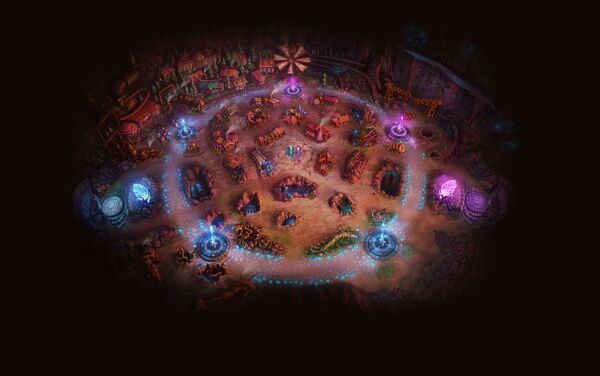 Located in the northern part of Kalamanda, the Windmill is the nerve center of the mining village. Wind and magic fuel the Windmill as it generates power to refine the raw materials mined from the village. Equally distant from each team’s starting location, the Windmill will be a constant point of contention.

Surveying of Kalamanda’s northeastern section was well underway when fighting broke out between Demacia and Noxus. Giant drills and open pits dot the landscape in this key capture location. Purple starts the battle closer to the Drill, but must be on the lookout for sneak attacks by Blue if they are to maintain control as the speed shrines are adjacent to the Drill (likewise for the Quarry.

The largest deposits of precious resources are located in the Quarry along the southwestern edge of Kalamanda. Closer to Blue’s starting position, this capture point resides next to a large techmaturgical mining device that local villagers referred to as “The Claw”.

During the initial mining effort the skeleton of an ancient worm – one far larger than even the mighty Baron Nashor – was uncovered in the southeastern portion of Kalamanda. Its proximity to Purple’s starting position will make this capture point easier for them to defend initially, though Blue will always be looking for an opportunity to seize control.

The northwestern part of Kalamanda houses all the refining structures used to extract magic and precious resources from the raw materials unearthed in the village. The Blue team has the early advantage in securing this point, but they must remain constantly watchful for potential sabotage by Purple.