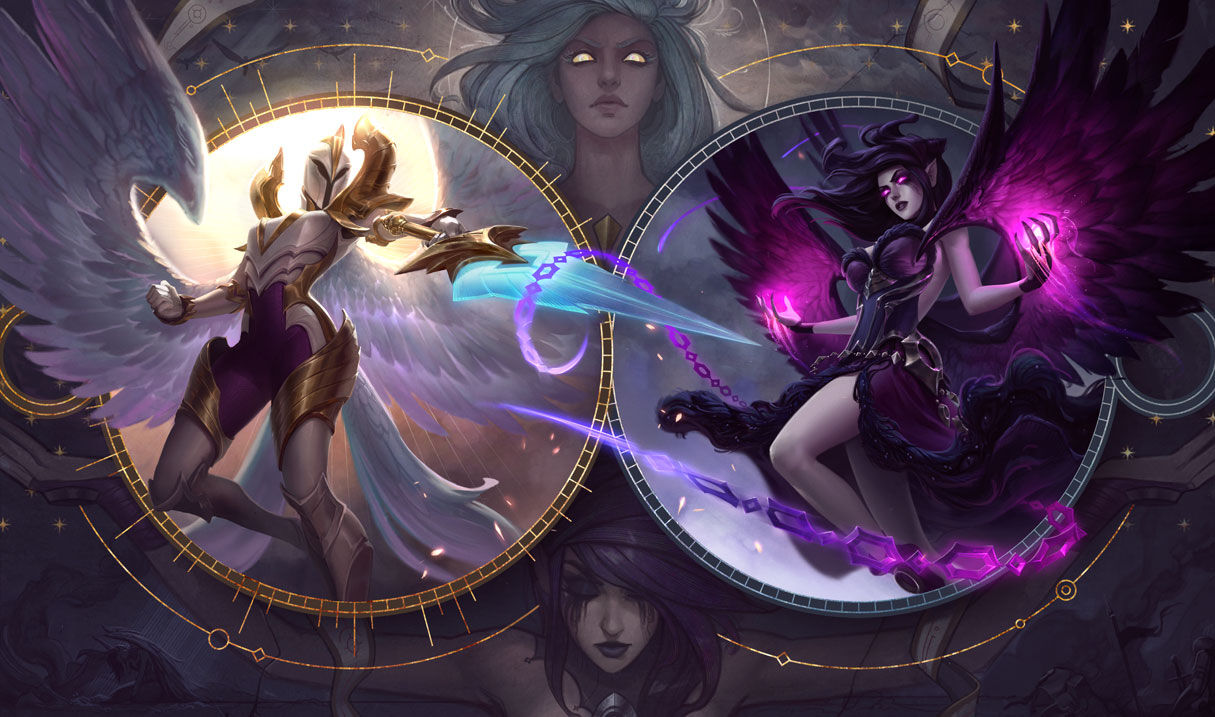 
An age of runes, a time of war.
The fury of the mages unleashed.
Cities aflame, continents sundered.
Runeterra undone, its seams unraveling.
Targon’s impossible peak did tremble.
Celestial eyes saw their doom,
and wept for what had become of Mortals.
Every soul cried out for Justice,


every heart a contest of arms.
II - The Coming of the Twins


Born beneath the vault of stars,
one in Light, one in Shadow.
Kayle and Morgana,
Sisters by Fate, joined hand in hand.
To Demacia’s fair lands they came,
A land untouched, a kingdom yet to be.
Though magic raged across the world,
it broke upon her wooded shores.


A Haven amid the Raging Storm.
III - Lessons Unheeded


The world endured, and darkness lifted,
but mortal hearts are slow to mend.
And truths won in blood and grief,
were lost as bitterness and greed returned.
Law and Justice went unheeded.
For it is the doom of mortals to forget,
the wounds of war, the scars of hate.
An abyss of Night yawned anew.


Until the world was bathed in Light.
IV - The Winged Protectors


A Sword of Flame birthed in lightning’s heart,
Fell from the stars, its twin halves alight.
Kayle took up her Blade of Justice
And Righteous Fire burned in her eyes.
Their mother’s sword? Passed on in death?
Morgana’s heart was broken to grasp her blade.
A veil of grief drew about her.
And power wrought their flesh anew,


in ways both wondrous and terrible.
V - Kayle, Bringer of Justice


Wings of gold and wings of jet,
sprang forth and lifted them high.
The Winged Protectors arose,
Defenders of the Realm, beloved Guardians.
Kayle’s golden light saw all.
She knew what lurked in evil hearts,
and purged wicked deeds by fire.
None were spared her wrathful blade.


As the brightest light casts the deepest shadow,
One defines the other and brings balance.
Morgana too fought for Demacia’s cause,
driving enemies back in terror.
But Morgana saw the bitter harvest to come,
For all seeds sown in darkness reap evil crops.
Mercy. Absolution. Atonement.
By such waters might goodness grow,


And end the cycle of war and death.
VII - The Battle of Zeffira


Toward the city of grand Zeffira,
an army of hate descended.
The Winged Protectors flew to the people’s aid.
Kayle fell upon the screaming host,
her blade of fire wet with blood.
But Morgana saw what Kayle had not.
A secret force within the city!
Zeffira’s people cried out for succor,


and Morgana swooped down in answer.
VIII - What Cannot be Undone


Kayle slew her foes in purest wrath.
Her body torn and bloody, she cried aloud,
“Sister fair, I am sore beset!”
Morgana heeded not her cries,
her powers bent to shield those within.
Zeffira endured, but much was lost,
One sister’s love, one sister’s hope.
Each saw through a glass, darkly;


a failing in the other, a fatal flaw.
IX - The Judgement of Silvermere


Trust, once broken, only slowly heals.
Yet not for Kayle and Morgana.
Warriors flocked to Kayle’s righteous banner.
Justice bled bright over all the land
On Silvermere’s Peak, a sinner knelt,
his neck bared to blood red blade.
He craved absolution, begged forgiveness.
Kayle had none to give, a killing blow she smote.


But the executioner’s edge never struck.
X - The Plea


A black shield of night stayed its edge.
Morgana begged her sister to relent:
“Do we forsake all hope of redemption?
Are all who err damned to die?”
Her pity touched Kayle’s heart with love.
Though her warriors clamored for death,
Her love for Morgana drowned their calls.
Thus Kayle let Mercy stay her hand.


And that would be Love’s undoing.
XI - The Fall


Accord was struck, a penitent’s pact.
Reprieve for souls whose hearts could mend.
Kayle’s disciples, zeal undimmed,
planned Morgana’s death, called her Fallen.
They came with chains and frightful passion,
Morgana answered with chains of her own,
black and deadly, they struck him down.
Kayle felt his death, wailed in despair.


And took to the skies, blade unsheathed.
XII - The Righteous and the Fallen


Kayle and Morgana.
Sisters no longer, enemies eternal.
On wings of gold and jet, they fought.
Their mother’s blades clashed in fury,
clouds aflame with Fire and Ruin.
Demacia’s skies wept crimson rain.
Together they fell, light and dark entwined.
Till Morgana threw her blade aside and cried:


In Morgana’s face, Kayle saw herself reflected;
Celestial glory marred by mortal passion.
She cried with loss and spread her wings,
to Targon’s light and realms beyond.
Morgana knelt in battle’s sorrow,
her wings a curse, a reminder of pain.
No blade could cut, no fire burn.
With chains, she bound black feathers tight.


And vanished through the mists of time.
XIV - Coda


Of Morgana, only myth remains.
Veiled secrets and hidden shadows.
Yet the legacy of Kayle burns bright,
in all our hearts and minds.
The wind whispers of her return.
When Targon’s beacon shines anew,
and night falls on the world,
look to the south on that day.


And pray for all Demacia.

Lore and Events
Retrieved from "https://leagueoflegends.fandom.com/wiki/Canticle_of_the_Winged_Sisters?oldid=2872933"
Community content is available under CC-BY-SA unless otherwise noted.