Braum, the Heart of the Freljord, revealed

The frozen peaks of the Freljord have for centuries punished the weak. But as these feared glacial lands host the graves of the frail, for the mighty, the land is a cradle, a place that elevates mere strongmen into true champions.

Braum's story started here, and as his strength and fortitude grew, so too did his legend. Today, his feats inspire all from the poorest of peasants to the fiercest of raiders. And as he prepares to bear his shield into battle once again, he goes knowing he carries the hopes and adoration of the Freljord's people with him.

Braum's basic attacks apply Concussive Blows. Once the first stack is applied, all basic attacks from Braum and his allies apply further stacks. Targets that sustain four stacks are

stunned and suffer bonus magic damage. After being

Braum propels freezing ice from his shield in a straight line skillshot, dealing magic damage (based on Braum's max health),

slowing and applying a stack of

Braum raises his shield in a target direction, negating the damage from the first attack from the shield's direction and reducing the damage of all subsequent attacks as long as the shield is raised. Braum intercepts projectiles with Unbreakable, causing them to hit him and then be destroyed. He also gains a minor speed boost until he lowers his shield.

Braum slams his shield into the ground, sending out a huge long-range skillshot that 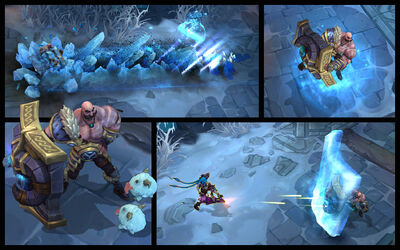 Braum is a strong and resilient melee support capable of making game-changing plays while saving his team from a barrage of enemy attacks. He forms

symbiotic bonds with the marksman he fights alongside, forming a

wall between the two teams and

leaping to the aid of his allies as he transitions into a late game tank.

In lane, Braum functions most effectively as a reactionary or opportunistic support, constantly on the lookout for chances to apply

Concussive Blows to the enemy duo. Accurate use of

Winter's Bite triggers the mark on targets who've wandered from their minion wave, while Braum can tag aggressive enemies with basic attacks before leaping back to the ranged safety of his marksman with

Stand Behind Me. After applying

Concussive Blows, Braum and his marksman have two solid options: either follow up hard and try to activate the stun, or zone the enemy and take up aggressive positioning.

Concussive Blows is powerful enough to win almost any trade, while the threat of triggering the stun acts as a powerful deterrent, forcing the enemy marksmen away from valuable minion gold. Braum's also a powerful asset during friendly ganks: by dashing to his jungler with

Stand Behind Me, Braum's able to get into the heart of the enemy duo. After they've been tagged with

But while Braum is undeniably useful on the offense, he's an absolute colossus when defending. The additional defenses provided by

Stand Behind Me help both Braum and his marksman survive otherwise lethal damage, while

Unbreakable has the potential to completely shield his ally from all incoming damage when positioned correctly. When activated,

Unbreakable, meaning he can reposition with his ally as they head towards the safety of their tower, or as the enemy team moves to flank around the shield. Braum is also able to continue attacking and casting abilities while he shields with

Unbreakable - landing the slow from

Glacial Fissure, offering friendly junglers easy ganking targets with its huge knock-up and slow. If Braum's looking to cut off his target's escape route, he can quickly reposition with

Stand Behind Me before firing

Glacial Fissure behind his target. The ability's slow field is large and powerful enough to force

The more allies around Braum, the more his shield shines. In small-scale skirmishes, he darts in front of his allies with

Stand Behind Me before using

Unbreakable to block pick attempts and soak up the subsequent damage. Should his team be outnumbered,

Glacial Fissure is again a strong disengage ability, particularly in the jungle's narrow pathways. Alternatively, when Braum's part of the more powerful skirmishing group, a well-aimed

Concussive Blows, all but guaranteeing a kill.

While other supports operate best within their team or deep in the enemy ranks, Braum functions best as a physical wall between the two teams, soaking up damage with

Unbreakable while his team's damage dealers get to work. The low cooldown on

Concussive Blows for his team. His

passive is strongest here – by floating between the two teams, Braum's able to use basic attacks on the enemy tanks and fighters as he hits the enemy backline with

Unbreakable, which has the potential to turn around even the most lamentable of teamfights, or protect his squishies when they're being attacked. Finally, unleashing

Glacial Fissure through the enemy team splits and (literally) slows their hopes of a coordinated assault, giving Braum and his allies the opportunity to move in and clean up. 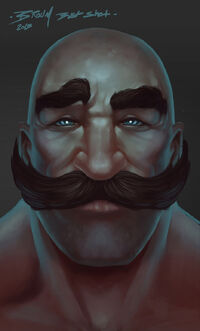 As with all champions, we designed Braum to fill a specific gap in the League of Legends champion pool. Specifically, he's the first true tank support that we've created, a champion who takes the hits for their team. We've had plenty of defensive supports - champions like

Janna, etc. - who negate damage through heals or shields, along with fighter supports like

Alistar, who are generally great at initiating teamfights before diving deep into the enemy team and disrupting as much as possible. Braum's something different: he's a tanky support who literally takes the hits for his team, and as such requires a new mindset, position and playstyle to most conventional supports. 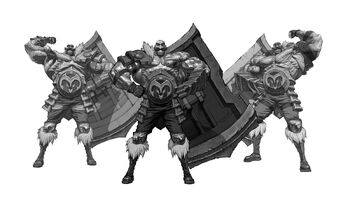 The key to Braum's unique playstyle is

E. It's an active defense, similar to

Wind Wall, but while

ability was created so that he'd have the means to protect himself (the team utility is considered a secondary bonus), we specifically designed

Unbreakable so that Braum could protect his team. It makes Braum different because he - more than any other champion - creates zones of safety behind him. He defends throughout the game, first by protecting his marksman during laning, then by protecting his entire team and tanking during late game. While other supports focus on buffing, heals or disruption, Braum fills a unique role between the two teams, taking the brunt of the damage for his team and letting his damage dealers do their thing.

This positions him literally between the two teams, and gave us some interesting design questions to answer. Specifically, how else does a defensive melee support contribute in fights when he has limited damage and can only land basic attacks on the enemy's beefy frontline? This is where we brought in his

Winter's Bite. Braum can harass while protecting, not necessarily through his own strength, but by applying

Winter's Bite only affects the first enemy it strikes, and Braum's basic attacks are melee), when his allies get jumped by enemy fighters and tanks, he can quickly reposition with

Stand Behind Me before peeling multiple targets with 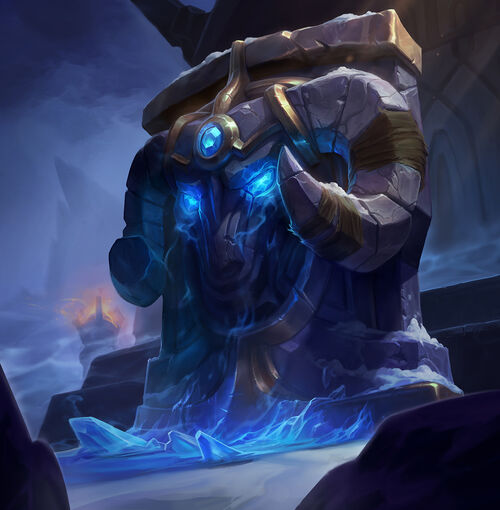 The Feats of Braum - Promo Soundtrack

Hello There (Legends of Runeterra)

Retrieved from "https://leagueoflegends.fandom.com/wiki/Braum/Development?oldid=3088497"
Community content is available under CC-BY-SA unless otherwise noted.