life steal in excess of 100% maximum health into a

shield for up to 50 − 350 (based on level), which slowly decays after not dealing or taking damage for 25 seconds.

Bloodthirster is a legendary item in

Unearthed near the marshes of Kaladoun, the Bloodthirster is thought to have belonged to a powerful soulstealer named Frax Van Itt. The wielder of this dangerous weapon is forever bound to the blade and its thirst for the blood of others. 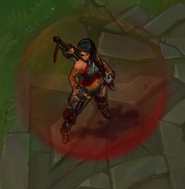