Bilgewater Bay is an island location, the main coastal settlement of Bilgewater. and the largest settlement on the Serpent Isles. 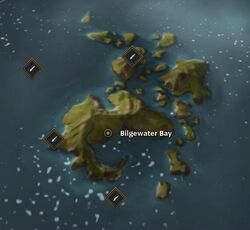 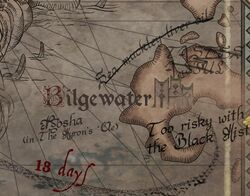 Surrounded by treacherous straits and towering cliffs, Bilgewater Bay is as dangerous as those who call it home. Visitors are often seduced by seemingly limitless opportunity, and become permanent residents—realizing that the longer they stay, the more they can exploit others for power and wealth.

Bilgewater lacks natural building resources, forcing its inhabitants to adapt. Much of Bilgewater has been built up with whatever people can bring, find, or steal—be it repurposed masonry, or even the broken hulls of the ships they traveled in. It's common to see remnants of ships from as far as Ionia, Demacia, and the Freljord incorporated into the architecture. Various settlements within the greater city have been built upon the remains of a far older civilization. Long abandoned temples have been converted into homes and places of business, with scaffold walkways leading from one establishment to another.

Due to Sea Monsters having such a large influence in the lives of the people of Bilgewater, sea monster iconography can be seen all over the nations structures and other everyday objects as part and parcel of Bilgewater’s unique appearance. Their clothes also have influences of a myriad of different cultures such as Demacia, Ionia, Freljord, and old Buhru. Serpent Callers wear clothing made out of hides of dead sea monsters, sometimes resembling the monsters they are trying venerate.

Ballad of the Wing-Eared Sunken Lady

Central to Buhru culture is Nagakabouros—god of life, growth, and perpetual motion. Also known as the Mother Serpent, the Great Kraken, or the Bearded Lady, she is commonly depicted as an enormous, monstrous head with many spiraling tentacles.

When arriving in and leaving port, sailors throw offerings overboard in the hope of quelling her wrath. Myths about her date back centuries, and it's a reckless sailor who fails to drop the traditional tithe into the Serpent's Well upon docking his ship in Bilgewater.

Illaoi, the Goddess' priestess, tests weaklings and the dead to see if they pass Nagakabouros's judgement. The Goddess directly intervened in one of the recent Harrowings to stop the Black Mist from destroying the entire city of Bilgewater.

Tahm Kench's likeness marks dens of avarice throughout Bilgewater. A symbol of greed and uninhibited freedom, the River King's face appears as lewd graffiti almost as often as it is a guidepost for those looking to satiate tastes of an indelicate sort.

The All Seeing Eye

At times, the Black Mist reaches across the seas — and the spirits of the dead go with it. The harrowing strikes most frequently in Bilgewater. Those slain by the spirits during the Harrowing are damned, their souls dragged back to the Shadow Isles when the Black Mist retreats.

Bilgewater is ruled by gang syndicates. Each Gang leader controlled a part of Bilgewater, with

Gangplank controlling them all until his downfall by

Currently Bilgewater power structure is in a state of flux, with numerous crime bosses and captains vying for power.

There is a commonly accepted truth in Bilgewater: the higher you climb, the less likely you are to drown. Those with money in their pocket will frequent the uptown taverns, enjoying fine drinks and merry conversation—even though, in a day or two, they will be back down at the wharf, wrangling a crew for their next dismal voyage.

Bilgewater is home to serpent-hunters, dock gangs, and smugglers from across the known world. For those fleeing justice, debt, or persecution, Bilgewater can be a place of new beginnings, for no one on these twisted streets cares about your past.

A fixture of every floating graveyard, these grim sailors ferry the dead out to their final resting place.

One of the most important roles on a hunting crew is the harpooner, who hooks and slays the beasts, and entire crews will be built around a veteran who can teach others a thing or two along the way. Many harpooners are marksmen, or particularly fearless freedivers... but few survive long enough for their reputation to become widely known.

As rivals represented by unique symbols and traditions, many of the fleets constantly fight among themselves for dominance. One of the oldest and fiercest dock gangs in Bilgewater, the Jagged Hooks swear undying allegiance to Gangplank. They take their name from the wickedly curved tools many of them use while hunting sea monsters.

Trial Of The Kraken Priestess