For the species, see Bellswayer.

A proud, celestial creature native to the Argent Mountains, the Bellswayer's beautiful chiming bells inspire and compel other sprites to attend them. Though they startle easily, bellswayers are just as quick to resume a composed and regal posture. 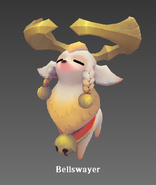