Basilisks are monstrous reptiles from the eastern jungles of Shuriman Continent.

They are fierce saurian predators that can grow to gargantuan sizes; few can stand against their charge. They are covered in thick greenish hide, hard as iron, which was used for camouflage in the thick native jungles as well as protection. They also have fin type extensions on their backs and back lower legs, hinting on their proficiency in traversing swampy areas. Other than their front horns, the creatures have strong a strong tail used for swimming and hitting other enemies.

Juveniles are prized riding beasts, and a few can stand against their charge. After they become too large for a rider to control, they are used as beasts of burden, or sometimes as living battering rams to smash down the walls of besieged cities.

The trainers withhold live food from Basilisks in the days leading up to battle. By the time the creatures are unleashed, they do not distinguish friend from foe, and are utterly indomitable. 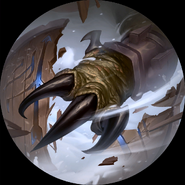