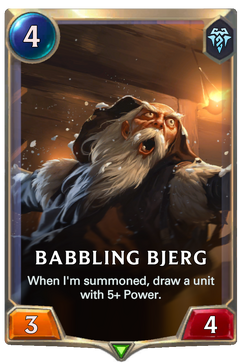 "Y-You've gotta believe me! It was huge, I tell you, HUUUGE!"

Legends of Runeterra
Retrieved from "https://leagueoflegends.fandom.com/wiki/Babbling_Bjerg_(Legends_of_Runeterra)?oldid=3259172"
Community content is available under CC-BY-SA unless otherwise noted.