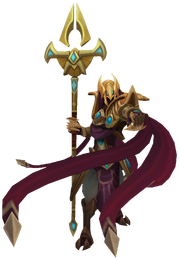 Summons a Sand Soldier near a random enemy that lasts 6 seconds. Sand Soldiers attack nearby enemies whenever Azir attacks, dealing 150 / 275 / 450 (×

AP) magic damage in a line.

As a mid-range Summoner, Azir's DPS and contribution to the fight is highly tied to his positioning and attack speed. He is a

Quicksilver due his gameplay begin DPS-Bases instead of Burst, he needs to keep constantly attacking to deal damage, his damage can be amplified in a plethora of ways, turning him into a

Blademaster easily ramps-up his damage, however, spatulas are highly difficult to come by. On more normal comps, Azir is better off with a

Karma on his side to increase his Attack-Speed for maximum efficiency and remove his downtime when he has to reposition himself to attack other units.

Seraph's Embrace is good to keep his uptime. As for his survivability,

Dragon's Claw it's just as good of an option.

Retrieved from "https://leagueoflegends.fandom.com/wiki/Azir/TFT?oldid=2986408"
Community content is available under CC-BY-SA unless otherwise noted.