takedown against an enemy champion within 3 seconds of damaging them refunds 20% of your ultimate ability's total cooldown.

Axiom Arc is a legendary item in 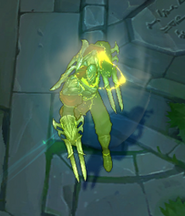