League of Legends Wiki
Register
Don't have an account?
Sign In
Advertisement
in: Articles with an editor apology, Cancelled champions
English

Averdrian, the Astral Guardian is a cancelled champion.

His mommy didn't love him. Left him in the trash can soon after he was ejected. This is the reason behind his lack of ethical behavior.

It was initially thought Averdrian had been reworked into

Heimerdinger, however Steven 'Coronach' DeRose confirmed that wasn't the case.[1] Still, Heimerdinger's name had appeared once in v0.9.22.14. Averdrian's icon was used as the icon for

Malzahar on the PBE before his release.

Ravager Nocturne, which implied Averdrian had finally been canceled.

And yet confirmation had come earlier, for on the 2010 Harrowing map skin for Summoner's Rift a coffin containing Averdrian (along with two others each containing

Tabu) could be seen, effectively serving as the final 'nail in the coffin' regarding his cancellation.[3]

The presented information is extracted from Closed Beta 1 (25-Mar-2009)[4]. There are minor wording adjustments for this presentation.

The original title was "The Astral Guardian", but later changed to "The Smurf Abortion".

Averdrian's personal data indicates possibly 5 Astral Spirits instead, but the description is overwritten.

Active: Sends a coiled beam of light to an enemy, dealing damage. This damage is not preventable in any way.

Active: Releases a pulse of energy, dealing damage around Averdrian and

slowing enemies within 100 units for 5 seconds.

Active: Absorbs one of his Spirits, granting him additional spell damage and a damage aura dealing damage each second to nearby enemies for 60 seconds.

Active: Ensnares an enemy in deadly energy, strangling it. Caster

channels for 5 seconds to deal damage each second to the target, and

prevents all movement and actions for the target. 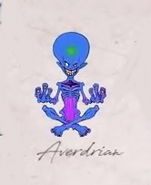 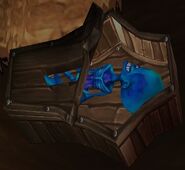