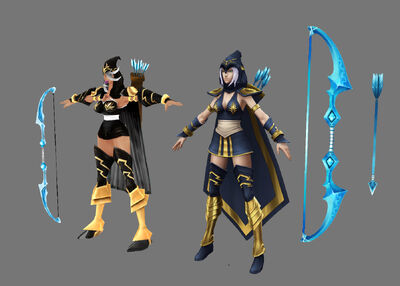 We've just rolled out a Visual Upgrade to one of your favorite champions:

Ashe, the Frost Archer! This upgrade includes a full overhaul of Ashe's model, as well as a full complement of new emotes and animations. Additionally, you'll see some improved spell effects, particularly on her ultimate ability

Here's a full list of new features coming in this Visual Upgrade for Ashe, the Frost Archer, and her existing skins:

We've rolled out these updates to Ashe's classic look as well as all her skins, so be sure to check out the stylish new digs in her wardrobe before you head out onto the battlefield.

Ashe has seen almost six years shoot by with her launch kit largely intact. Until now! We’re not rebuilding her from the ground up, but we have made some pretty meaningful changes to her abilities all intended to solidify Ashe as League’s premier utility carry. Finally, we’re also sliding in a couple of small tweaks to give her opponents more ways to play against her. Here’s a rundown of her new moves!

slows whoever she damages with her basic attacks and abilities.

slowed targets, replacing her ability to

Ashe nocks several arrows on her bow before firing them simultaneously in a large cone before her. Each arrow deals damage and

[New] Ashe fires more arrows than before. Targets are more likely to be hit by multiple arrows, but they'll only take damage from one.

Ashe commands her hawk to scout out an area. The hawk travels slowly,

revealing areas it passes as it heads towards the target direction. Once the hawk reaches its destination, it hovers for a few seconds,

revealing all non-stealthed units, even in brush.

[New] Hawkshot now has a global range. Ashe can store up to 2 Hawkshots for quick use, too.

Ashe fires a huge ice missile in a target direction, damaging and

stunning the first enemy champion it hits, with the

slows all neutral and enemy targets surrounding its victim.

Check out the abilities above and you’ll see that most of our changes focus on taking out the less exciting aspects of her kit.

Frost Shot, for instance, was a pretty dull ability: you either had the ability on and slowed your targets while slowly losing mana, or you didn’t. At the same time, we really liked the idea of Ashe as a kind of utility marksman, someone who brings unrivaled crowd control and vision to games compared to other champs in her class. So we moved

Frost Shot to her

toggle to the side while opening up her Q for something new.

Ranger's Focus fills the gap, providing Ashe with incentives for staying in combat (versus her old

passive, which literally rewarded you for not attacking) and giving her a decent spike in damage when she handles her

As for the other part of her

passive, removing crit strikes from a marksman might feel unintuitive - they’re pretty central to a bunch of basic attack damage dealers - but

Frost Shot still rewards Ashe for building crit. Thing is, instead of hoping to get the occasional nuke, Ashe players will consistently deal extra damage as they build crit, and even more damage when they build that old staple of hers:

The changes to Ashe's

Q enhances her basic attack-focused gameplay during all stages of a game. She shoots things, builds up

Ranger's Focus to deal extra damage alongside her basic attacks. That left

Volley too strong, so we tweaked it. We gave Ashe more rounds in her volley, so if she's able to cast it from distance, she can theoretically hit more targets and instantly fully stack her

Focus. However, to compensate, we retooled the ability so that enemies and neutral targets are now much more likely to absorb multiple arrows. Old Ashe could fairly reliably hit enemy targets through their minion wave, something that'll be much harder to pull off with the updated ability. This means enemy frontliners can get up in Ashe's face now and reliably tank every

Volley round for their backline squishies. These changes should emphasize

Volley as a tool for

Focus development and crowd control rather than raw power and poke, and although it'll be less of a threat during laning, the ability will have a bigger presence in teamfights, particularly when Ashe positions herself correctly.

Finally, we took out the old

Hawkshot passive because it basically gave Ashe a bunch of invisible power. Instead, we gave her tangible power by significantly improving her E active! Turning

Hawkshot into a global ability - and allowing her to store multiple charges - gives Ashe and her team an immediate and immense vision bump, particularly when the enemy team's effectively killing your network of wards. By firing out multiple

Hawkshots, Ashe can use their vision to scout out

Baron and the surrounding brush for signs of impending Fnatic-style brush baits. You now have no excuse for facechecking!

Retrieved from "https://leagueoflegends.fandom.com/wiki/Ashe/Development?oldid=3063798"
Community content is available under CC-BY-SA unless otherwise noted.