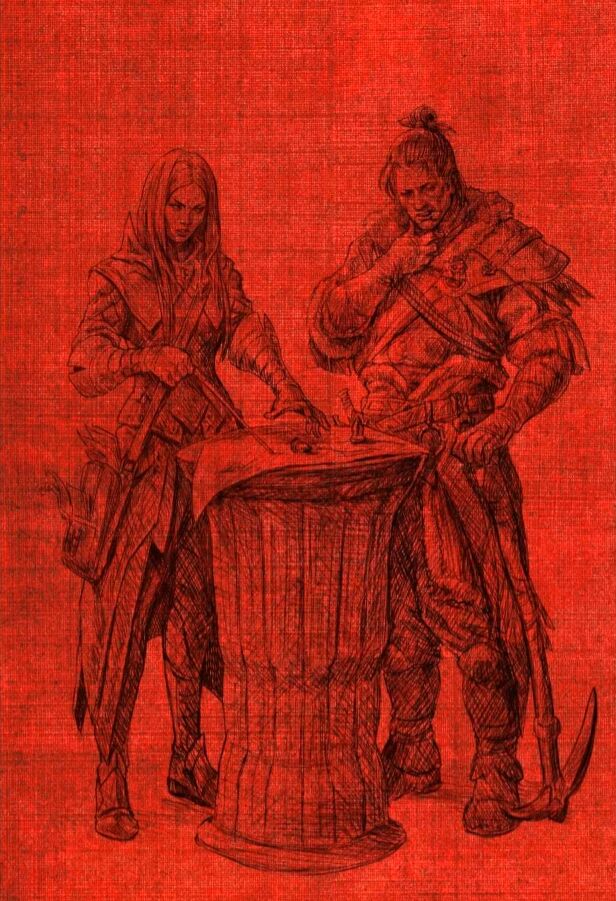 Noxus arrived at Kimir's gates before the remains of its ragged army had time enough to bury their dead.

After a decisive victory, a Noxian warhost puts up their tents before the gates of Kimir. The city has not even had time to bury their fallen. Colm, the new leader of the city after their elder fell in battle, discusses with his friend Marsh how they saw the border creep closer for decades, how they managed to stay free for this long, yet lost now. Colm and the ragged remains of the Kimiran guard are summoned to meet the Noxian commander for a short address. The commander is Warleader Hama, a large, energetic woman with green eyes. She congratulates them on their defense, saying that they defied as well as any, but Noxus cannot be resisted. Finally, she declares that Colm is her new lieutenant and that they will be marching again soon.

Together with Noxian warmasons, Colm visits key points around the city. On top of a hill overlooking a quarry, he explains their craft and what they mine. Their exports consist mostly of stone and a variety of goods fashioned from them. The warmason however says that they will stop mining soft stone here and will instead focus on the harder granite, which is useful in the war efforts. Colm thinks to himself that Noxus does not care about the city’s history or tradition and only sees assets to exploit. Back in the longhall, they discuss the fields around the city. Kimir used to grow decorative flowers which make up good dyes, and Colm points out that they are rare and therefore coveted this far north. A single well-placed bundle of blue stargazers supposedly even won the war against the neighboring city of Morrin before it began. Noxus disregards all that and demands that they grow more medicine, because they need to ship it along their northern border. Kimir can import dyes from the south.

In the afternoon, Colm leads a group of former soldiers down the path to their graveyard outside of the city. They plan to honor their fallen and carve statues in their likeness, as is their tradition. On their way, Marsh and Colm have a heated argument about their new position. Colm imagines a future where they are part of Noxus, but also points out that they will become dependant on the empire and now constitute the northern border against the Freljord. Marsh can barely contain his anger and still wants to resist the new rule. When they arrive at the graveyard, they find that a group of Noxian soldiers is already working to bury the fallen soldiers of Kimir in a mass grave. Marsh confronts them, saying that this is not the way they treat their deceased. The Noxian points out that they have to get this over with quickly: Since the Kimirans will only depart once the dead are buried, they received orders to help the townsfolk bury them. Colm and Marsh attack them and a melee brawl ensues, which is then stopped by the arrival of Hama. She offers that, if Colm wants to insist on their tradition, he can fight for it in Noxian tradition.

Later that evening they meet for the match in a ring created close to the Noxian tents. No armor, the first to push the other out of the ring wins. During the fight against the much more experienced soldier, Colm is thrown on his back and Hama drags him to the edge of the circle. With his last strength, he rips his arm free from her - dislocating his shoulder in the process - and tries to throw her over his shoulder out of the ring. Hama however doesn’t move, and finally kicks him out. In the end, Colm admits his defeat, and Hama pulls him on his feet and pushes his shoulder back into place. He agrees to serve as a steward, bringing Kimir to its full potential for Noxus even if it disappoints his fellow citizens. Hama allows them to take the night to bury the fallen, and awaits the squad of soldiers in the morning.

Some years after Kimir was conquered, Colm gets to have the traditional first strike on a streak of granite. His old friend Marsh arrives, now his general. Both jokingly complain about their work, and Colm mentions that they might need more caravans for this new source of granite. While looking over the hills where blue stargazers bloom, Marsh announces that Morrin surrendered after a tough fight. Unfortunately, their elder was killed in the fight. Marsh took the best soldiers into his own warband and sent the civilians to Kimir so Colm can teach them what it means to be Noxian - just like Hama taught him.

Lore and Events
Retrieved from "https://leagueoflegends.fandom.com/wiki/As_Stone?oldid=3138424"
Community content is available under CC-BY-SA unless otherwise noted.