Welcome to the Playground (Arcane: S01E01)

Zaun's underground streets in the wake of a heist in posh

Zaun. The corpses of their parents lay among the fallen.

Vander, who had led the Zaun revolutionaries into battle, takes pity on the two children and carries them to safety.

Some years later, Vi leads Powder alongside their adoptive brothers Mylo and Claggor on a heist that begins upon the rooftops of Piltover. Powder, the youngest of the group, is afraid to jump a gap between buildings but Vi assures her that she's ready. Still, she nearly falters.

They make their way to the balcony of an affluent Piltover penthouse, later revealed to be

Jayce's study. Vi forces the door open and they begin filling a bag with whatever valuables they come across. Powder discovers a cache of what she doesn't recognize as hex crystals, but Jayce arrives outside the entrance. Mylo bars the door with a chair while Vi rushes the group to grab what they can and get out. Powder pockets the crystals, but drops one in her haste. After rolling across the floor, it collides with a wall and shatters, resulting in a massive explosion which causes a portion of the outside wall to crumble and collapse onto the ground below.

The children flee the scene, pursued by a squad of Piltover enforcers, though they make their escape by jumping into a garbage chute. On the way home, they're stopped by another group of urchins led by a boy named Deckard. Deckard insists they share some of the loot, but Vi swings the heavy bag of valuables into Deckard's face. She then tosses the bag to Powder while she, Mylo, and Claggor engage in a fist fight with Deckard and his thugs. With the three of them distracted, one of the boys attempts to seize the bag from Powder, prompting her to run away on her own with the older boy in pursuit. Vi, Mylo, and Claggor successfully defeat Deckard and the others, but Powder is backed into a dead end alone. She attempts to deploy a homemade grenade (which she calls "Mouser") in order to halt her aggressor, but it ends up being a dud. She is ultimately forced to discard the bag of loot into the deep waters below in order to distract the boy while she escapes.

Powder regroups with her siblings a short while later, where Mylo bemoans the rotten luck of having lost their entire haul and accuses Powder of "jinxing" every job. They take an elevator down into Zaun and begin walking home.

Meanwhile, Vander is tending bar at The Last Drop, where he lives with the four adopted children. He pours a pair of drinks for a patron named Huck, who sits down with a man named Verne and his associate, Jules. Verne declares that his business with Huck is concluded, and throws Huck a small sack of money. Huck is furious, stating that the sum is far less than what they agreed upon. Verne insists that his price is fair, and Jules makes a show of intimidating Huck by brandishing a short blade. Vander intervenes, asserting that Jules and Verne would not be allowed to leave his bar in one piece unless they honored their word to Huck.

Vi, Powder, Mylo, and Claggor arrive home moments later. Though Vi insists that Vander not learn of their failed heist, it becomes apparent that he already knows. Vander scolds Vi for her foolishness, reminding her that Piltover is off limits. After their argument gets heated, Vander tells the other kids to leave so that he and Vi can speak in private. He reprimands Vi for not understanding the gravity of her leadership role in the family, saying that she is ultimately responsible for the fates of her younger siblings. Vi wants to stand up for Zaun, but Vander insists that meddling with Piltover will only lead to more problems. He tells her that she'll have to lay low for a while.

Vander takes Claggor and goes to have a word with

Ekko, or "Little Man," who tipped Vi off to Jayce's penthouse in the first place.

Powder discovers that she still has several hex crystals in her pockets. She then overhears a conversation between Vi and Mylo in which Mylo belittles Powder once again. However, Powder leaves before she can hear the next part of the conversation, in which Vi defends Powder and criticizes Mylo's own performance during the heist.

Vander and Claggor arrive at Benzo's pawn shop, where Ekko works. Benzo tells Ekko to step outside so that he can speak with Vander. There, Claggor asks how Ekko found Jayce's penthouse, and Ekko informs him that he followed Jayce home after Jayce made some purchases at Benzo's shop. Two enforcers, Marcus and Grayson, suddenly approach from down the street. Claggor leaves in haste and Ekko acts natural.

The enforcers enter the shop and declare their intention of hunting down whoever caused the explosion. Benzo and Vander play coy, to which Marcus reacts angrily. Grayson tells Marcus to take a walk and cool off, and he does so. Ekko climbs up to the building's second floor, where he is able to spy on the ensuing conversation. He is surprised to learn that Grayson and Vander have a pre-established deal: Vander keeps his people off of Piltover's streets, and in return, the enforcers stay out of his business. Grayson beseeches Vander for information, saying that things will only escalate if she doesn't apprehend a suspect tonight, but Vander refuses. She gives him a capsule meant for a pneumatic messaging tube, saying that it will reach her (and only her) if he changes his mind.

Vi finds Powder brooding and berating herself for "ruining everything." When Powder rejects Vi's attempts to comfort her, she brings Powder up to the roof and points out several locations around the city where Vi, Mylo, and Claggor failed spectacularly in the past. Most notably, she points out her favorite childhood toy, a stuffed bunny, hanging from a power line. She says that they've all had bad days, but the important thing is that they learn and stick together. Powder reveals that she still has the hex crystals, which Vi offers to keep their "little secret." She assures Powder that she's stronger than she thinks, and that one day, this city will respect them.

Meanwhile, in a reclusive laboratory, Deckard is manhandled by a group of adult thugs.

Silco criticizes the boy's performance, saying that he was supposed to follow Vander's children without interfering. Deckard lies and says that he was the one ambushed. Silco implies that he would sooner kill Deckard than allow anyone to tie the boy back to him, but Deckard saves himself by revealing valuable information: that the children were behind the explosion in Piltover. The thugs escort Deckard away, leaving Silco alone with

Silco asks for a demonstration of Singed's latest work: a bright purple liquid, later to be known as "shimmer." Singed places a cat inside the cage of a lab rat whose drinking water has been replaced with shimmer. While the cat initially prowls, meaning to kill the smaller creature, the rat frantically drinks shimmer and displays drastic physical changes as a result. Its eyes turn purple and it grows dramatically in size, easily killing the cat in one swift blow and even cracking the glass of the cage in the process. Singed asks if Silco has a subject in mind, to which Silco implies that he means to further test shimmer on Deckard.

Based on the game

Thanks to All Past & Present League of Legends Players 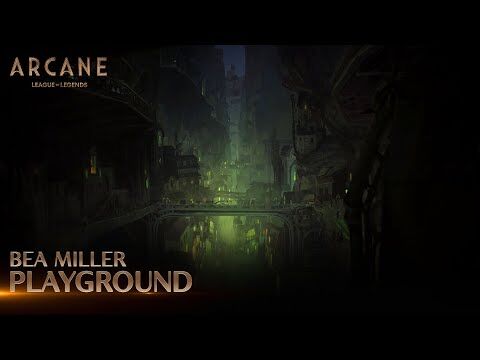 Playground
Who told you what was down here?
Come along, if you wanted a peek

I’ve seen your face around here
Come alone, tell me under the table
What do you seek?

Ohh... Welcome to the playground

What brings you to the lost and found, dear?
Won’t you pull up a seat?
Everybody got a price ’round here to play
Make me an offer, what will it be?

Welcome to the playground

Welcome to the playground