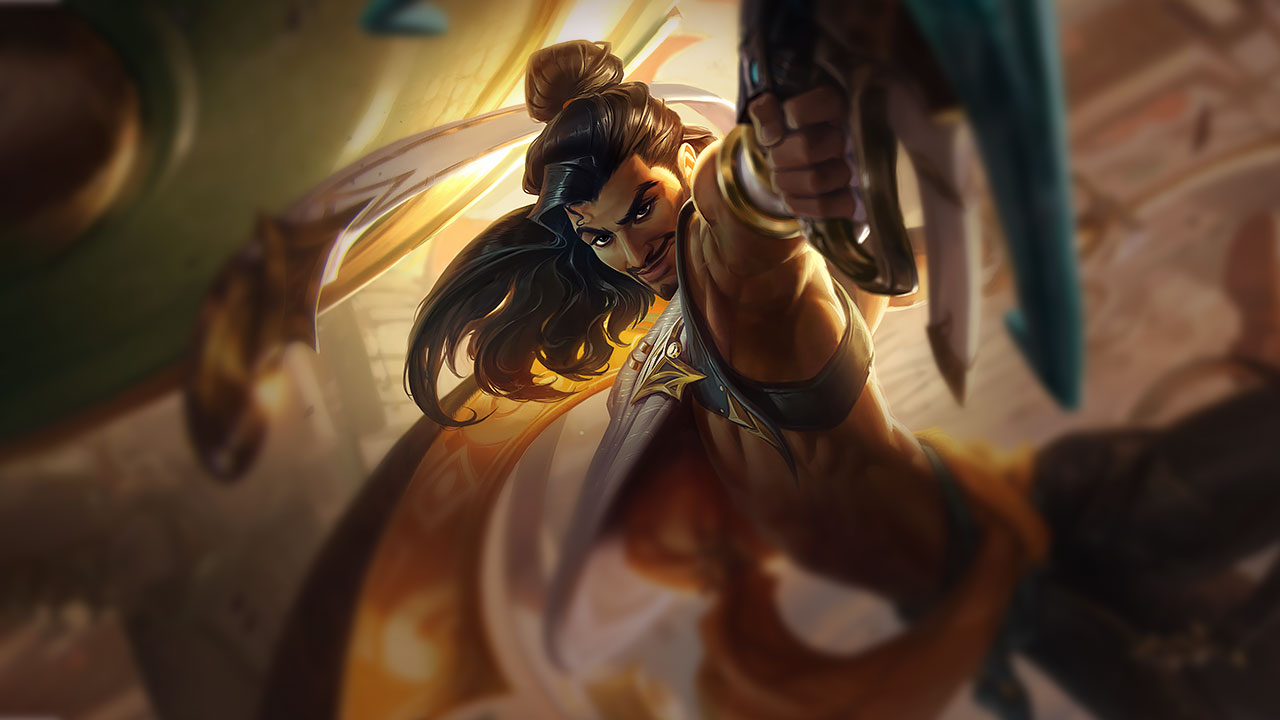 Akshan is a champion in League of Legends.[1]

Innate: Whenever Akshan uses a basic attack, he fires an additional shot after a delay that deals 50% AD physical damage, increased to 100% AD against

on-attack effects at 100% effectiveness and can

on-hit and ability hits apply a stack to affected enemies for 5 seconds, refreshing on subsequent applications and stacking up to 3 times. The third stack consumes them all to deal 10 − 165 (based on level) bonus magic damage and, if the target is a

shield for 2 seconds. The shield may be gained only once every few seconds.

Active: Akshan throws a boomerang in the target direction that grants

sight around its trajectory and deals physical damage to enemies hit,

revealing them for 1 second and extending the boomerang's range each time it hits a target. If the boomerang hits an enemy

Once the boomerang has passed its original range and has not struck an enemy in the last 500 units of travelling, it homes back to Akshan and applies the same effects to enemies hit.

Enemies can be hit by Avengerang only once per pass.

champions that kill allied champions as Scoundrels for 60 seconds. If Akshan scores a

takedown against a Scoundrel while alive and within 3 seconds of damaging them, he receives an additional

dead allied champions that they have slain after 1 second.

When Akshan claims a Scoundrel's bounty he removes the marks of all other enemies. Scoundrels refresh their mark duration on subsequent kills, and will have their mark removed when they die by any means. Akshan cannot mark enemies as Scoundrels while they are dead. Allies are revived at their summoning platform.

camouflage, which lasts indefinitely while he is near terrain or inside

brush, and for 2 seconds otherwise. During Going Rogue, Akshan can see trails leading toward Scoundrels, and while facing them if they are within 5000 units, he gains

Going Rogue can be recast after 1 second, and does so automatically after its duration. Attacking or casting abilities ends Going Rogue immediately.

"To the shadows... where the scoundrels hide."
Info

Active: Akshan can activate Heroic Swing three times before the ability goes on cooldown, and can use the third cast only after 0.5 seconds of the second cast. Akshan may input a attack or movement command to use the second and third casts.

First Cast: Akshan prepares to swing for up to 2.125 seconds, firing a hook in the target direction that embeds in the first terrain hit. Heroic Swing's second cast can be used while the hook is attached. If the hook fails to attach or Akshan is moved or becomes

polymorphed within the duration, the preparation will end prematurely, cancelling Heroic Swing in the process.

swings around the terrain in the target direction for 3 seconds, and stops upon colliding with an enemy champion or terrain. While swinging, he rapidly fires at the nearest

visible enemy to deal them physical damage and apply

on-hit effects at 25% effectiveness per shot.
Akshan will be

polymorphing crowd control during the dash.

jumps to the target location, though not through terrain, and fires one last shot at a nearby

reduces Heroic Swing's current cooldown to 0.5 seconds. The shots can

Going Rogue can be cast during the third cast's dash.

Comeuppance can be cast at all points during Heroic Swing. Akshan prioritizes firing at enemy champions with stacks of

Dirty Fighting, will not fire while

Comeuppance is active, and

reveals himself while firing. Heroic Swing can be cast during Akshan's other abilities.

Active: Akshan locks onto the target enemy champion and begins

revealing them as well as

revealing himself. He gradually stores bullets into his weapon over the duration.

Comeuppance can be recast after 0.5 seconds, and does so automatically after the duration. Comeuppance is placed on a 5-second

cooldown if the channel is canceled.

Recast: Akshan fires all stored bullets at the target, each granting

sight around their trajectory as they travel and dealing physical damage to the first enemy hit, including structures, increased by 0% − 300% (based on target's missing health).

life steal at 100% effectiveness, and

Akshan can move while channeling Comeuppance. 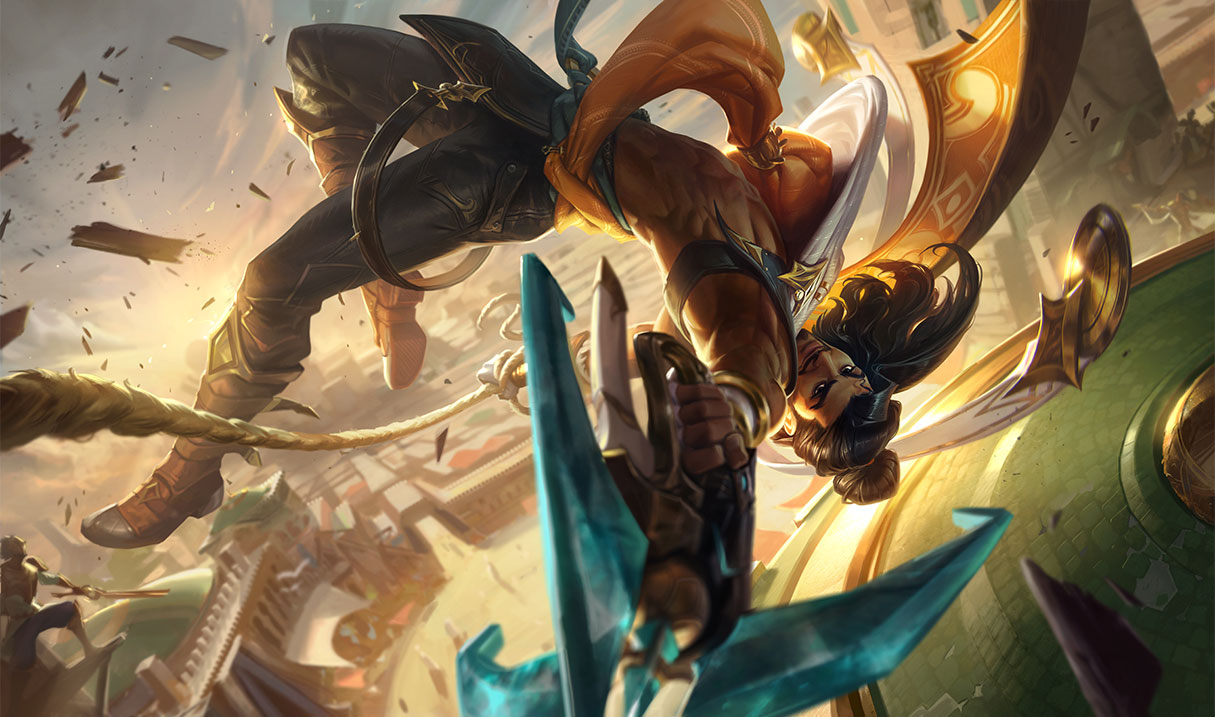 975
22.07.2021
Raising an eyebrow in the face of danger, Akshan fights evil with dashing charisma, righteous vengeance, and a conspicuous lack of shirts. He is highly skilled in the art of stealth combat, able to evade the eyes of his enemies and reappear when they least expect him. With a keen sense of justice and a legendary death-reversing weapon, he rights the wrongs of Runeterra's many scoundrels while living by his own moral code: “Don't be an ass.” 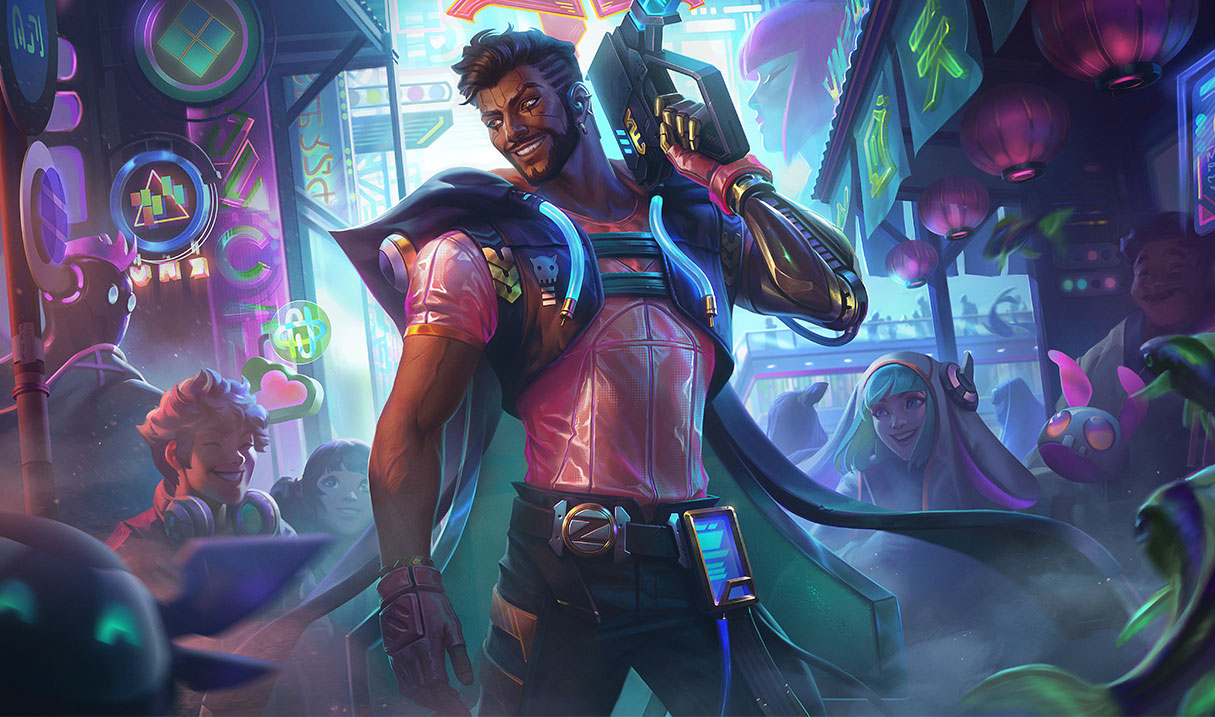 1350
22.07.2021
The Neon Rogue of Sound City has become the hero of the underground, largely due to his bravery, his wit, and his uncanny ability to sneak into highly-secure corporate buildings without being detected. Being charming as hell doesn't hurt, either. 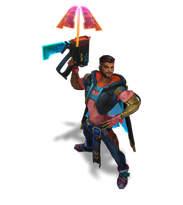 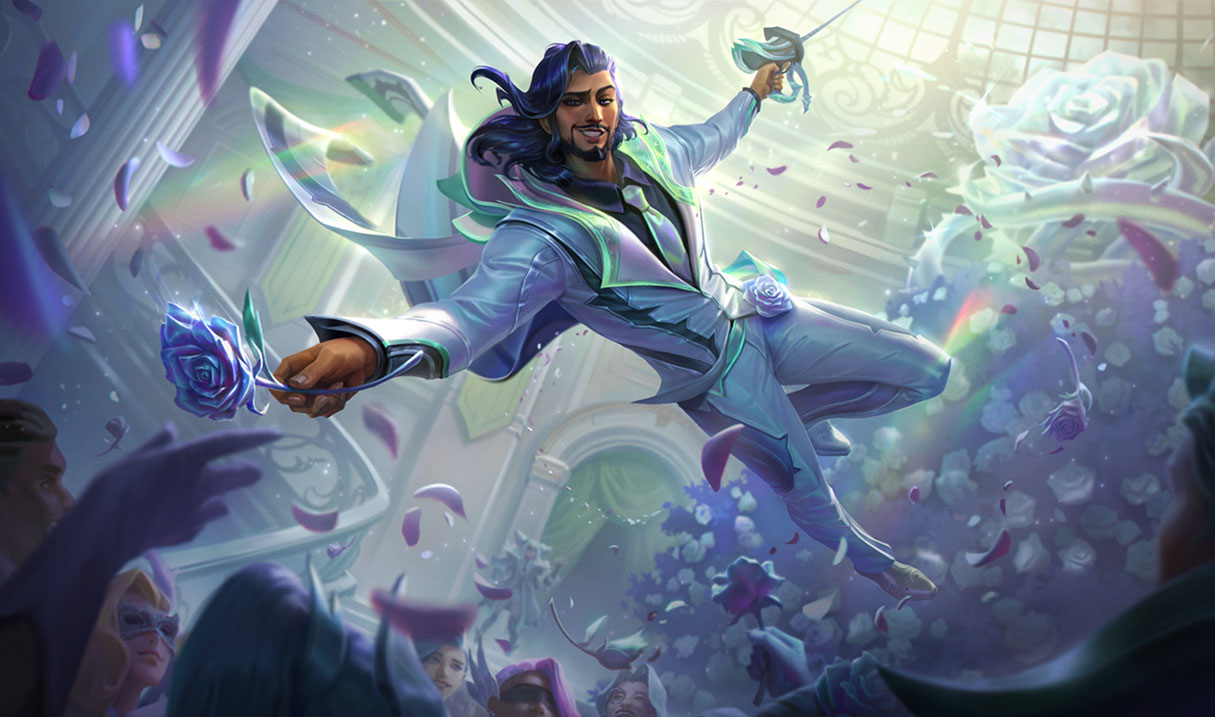 1350
10.02.2022
As roguish as he is handsome, Akshan abandons his daring adventures each year to make a highly-requested appearance at the festival. He might be seen stealing a dance or two, but he only has eyes for one among the crowd. Their moral… discrepancies are no match for the electrifying chemistry between them. 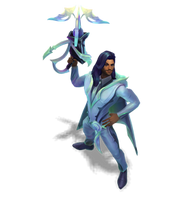