So, now that we've covered the basics, what are some other things that have a tendency to appear in threes? Well in response to the community concerns surrounding

Kennen to the mix to promote the spirit of friendly competition. But even with a Yordle already competing for assignments with the infamous Eye of Twilight, there's got to be room for a little feminine} energy in any self-respecting ninja organization, right? What the Kinkou Order without a dash of the classic femme fatale, right? Could it be... three ninjas?! Rule of threes!

Summoners of Valoran, the Kinkou Order of the Ionian Isles wanted me to reinforce to you that they are an equal opportunity employer! While by now you've all witnessed the awesome power of

Kennen on the Field of Justice, none of you have yet run afoul of

Akali, the Fist of Shadow. Which is fortunate for all of you, since ninja academies are really only discerning about one thing: the lethality of their students! And this is one lady ninja who doesn't like to disappoint her instructors! 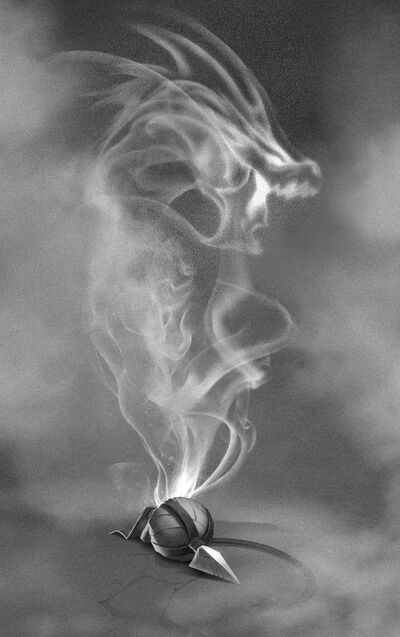 Now let's move on to the next big VGU that will be stepping out of the shroud: Akali. Akali has always been a beloved champion, but she hasn't aged particularly well. Her assassin pattern is very all-or-nothing, so it can be difficult for her to succeed unless she snowballs off of early kills. We want to give her more options for success by playing up her ability to hide in plain sight. We think her Shroud is an awesome and iconic ability and want to push it even further.

Akali also has trouble laning against a large portion of the modern League cast, so we'll be looking to give her a stronger laning pattern that should bring her more in line with the current needs of solo-lane champions. This will allow us to reduce her snowball potential, as she won't have to be as dependent on early kills to succeed.

Overall, we are pretty satisfied with Akali's high-level theme of a “Ninja Assassin,” but the current execution is a bit generic. We'll be looking to add a couple more unique traits to Akali to elevate her beyond this common theme. As for her narrative, we want to go with an approach similar to the one we took for the Gangplank VGU, meaning we want to extend her narrative rather than rework it. Instead of a new Akali, this will be a tale of growth and change.

Tools of the Trade

So let's go rogue and talk some more about the upcoming Akali VGU. In the last roadmap,[4] I mentioned that we wanted to preserve her Shroud as the ability that makes her unique and helps her stand out in the Assassin class. Though the baseline functionality is the same, we've made some pretty dramatic changes to Akali's Shroud so that her play pattern of “hitting hard, repositioning, and then striking again” is more engaging for Akali players. Outside of her Shroud, we felt it was important to maintain her high mobility, especially since it fits really well with her ninja theme, so don't expect that to vanish.

Another thing we wanted to maintain about her kit was her dual scaling, as that gives Akali flexibility and really makes her feel like a champion who has mastered a wide range of weapons—both magical and physical. And speaking of her thematic, we'll be extending her current lore and looking at what her life looks like a couple years down the road when she strikes out on her own, ready to show the world her skill as a ninja. 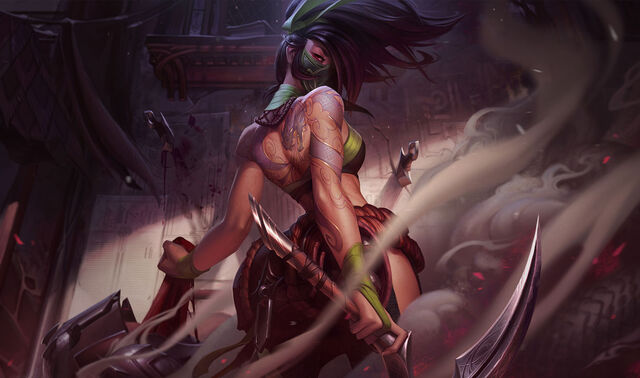 When Akali walked away from the Kinkou Order, she defined her fighting style beyond Shen's teachings. No longer one to cut enemies down in a burst of up-close kama flourishes, Ionia's Rogue Assassin employs hit-and-run tactics: constantly shifting position as she strikes, steps back into stealth, then strikes again.[5]

Crossing the ring also empowers her kama, which increases the range and damage of her next attack. This attack also restores a small amount of energy.

Akali throws five kunai in a narrow arc, damaging enemies directly in front of her and slowing those at maximum range.

If cast with nearly full energy, Akali heals for a percentage of the damage.

Akali restores energy and creates cloud of smoke, which slowly spreads to cover a ring-shaped area. While in the smoke, Akali is obscured and has increased movement speed.

While obscured, Akali is stealthed and though her position can be revealed, Akali herself can't be—meaning she can't be targeted by abilities or attacks, including by turrets.

Akali can leave the smoke a few times to extend the duration of Twilight Shroud by a small amount.

Akali backflips and throws a shuriken forward, damaging and marking the first enemy hit. The shuriken can also hit and mark the smoke from Twilight Shroud.

Akali can reactivate Shuriken Flip to dash to the marked target, damaging enemies she passes through.

Akali dashes up to two times, with a slight delay between. The first dash deals physical damage and briefly stuns, while the second dash deals magic damage based on the missing health of the enemy.

Akali is an adept assassin who fights while on the move, adding new layers of complexity to her playstyle. The secret to Akali's technique lies in the ring created by Assassin's Mark: constantly crossing in and out will keep your kama swinging and your damage deadly. Shuriken Flip and Perfect Execution tag your target with the Mark as you dash forward or backward, activating your empowered kama. When you recast the ability and dart back in, combine the passive hit with your Five Point Strike for a lethal burst attack.

Akali has a more extended execution than other assassins—Twilight Shroud helps you reposition and avoid retaliation at the same time. More advanced acolytes will use it in combination with Akali's other abilities to set up, cross into, and slip back out of the ring. Even if you run out of energy and enemies attempt to punish your overconfidence, clever use of Twilight Shroud will keep them grasping at shadows.

“The only rule that matters is that your enemies don't walk away.”

From Akali With Love!

Retrieved from "https://leagueoflegends.fandom.com/wiki/Akali/Development?oldid=3063795"
Community content is available under CC-BY-SA unless otherwise noted.