< Ahri
View source
watch 02:52
Roblox: DeepWoken - The Loop
Do you like this video?
Play Sound 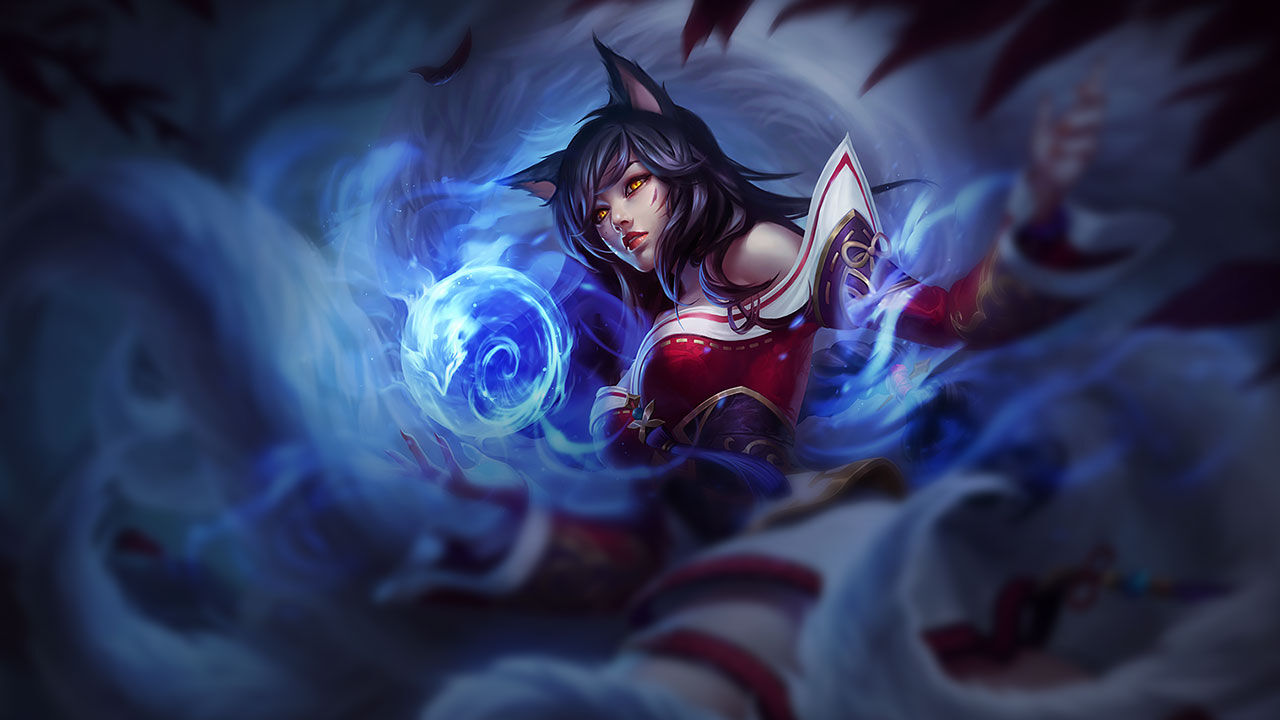 Ahri is a champion in League of Legends.[1]

Innate: Ahri's abilities grant a stack of Essence Theft for each enemy hit, up to 3 stacks per ability cast.

Upon reaching 9 stacks, Ahri's next ability

40% bonus movement speed that decays over 1.5 seconds and conjures three flames which orbit her clockwise for up to 5 seconds.

After 0.25 seconds, each flame targets a

visible enemy, or after 0.4 seconds targets the closest visible enemy in range, dealing magic damage. The damage is doubled against

champions, then minions that would die to Fox-Fire's damage, and then the target of Ahri's last basic attack within 3 seconds.

Active: Ahri blows forth a kiss in the target direction, dealing magic damage to the first enemy hit,

knocking them down, and

slowing them by 65% for a duration.

An enemy hit by Charm is rendered vulnerable for 3 seconds, taking 20% bonus damage from Ahri's abilities, including the Charm that triggered it.

visible enemies, dealing magic damage. Spirit Rush can be recast twice more with a 1 second static cooldown between casts within 10 seconds of the activation at no additional cost. 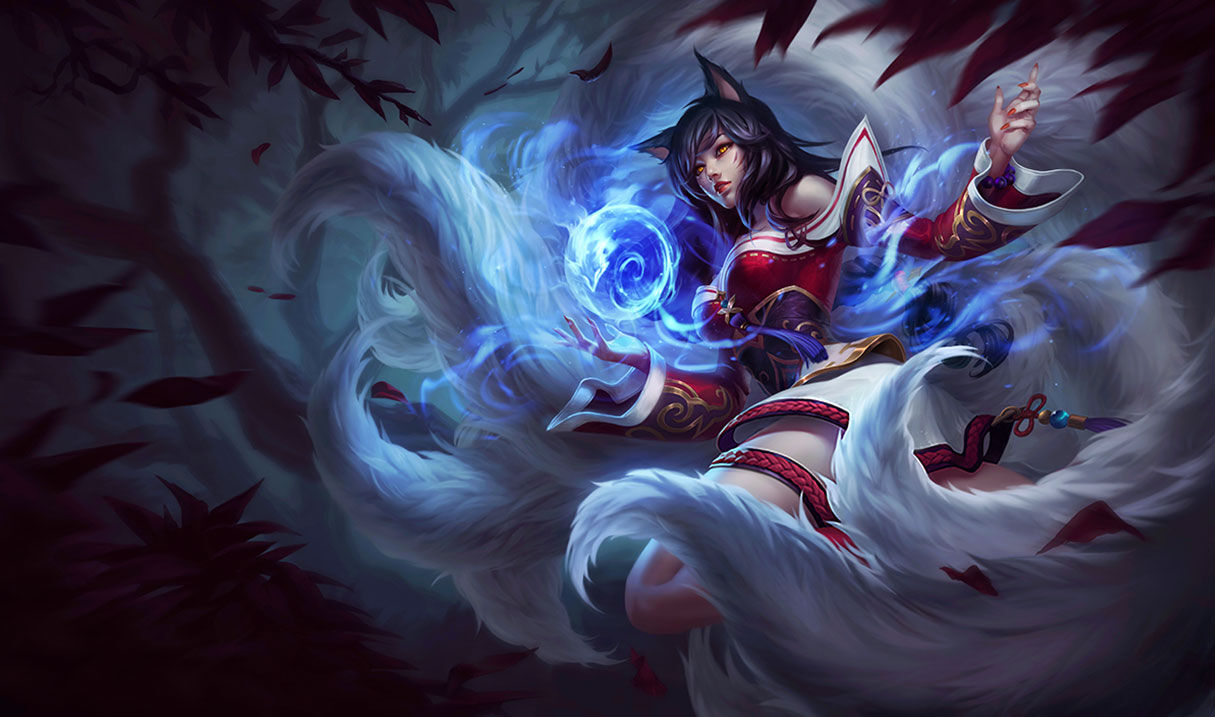 880
14.12.2011
Innately connected to the latent power of Runeterra, Ahri is a vastaya who can reshape magic into orbs of raw energy. She revels in toying with her prey by manipulating their emotions before devouring their life essence. Despite her predatory nature, Ahri retains a sense of empathy as she receives flashes of memory from each soul she consumes. 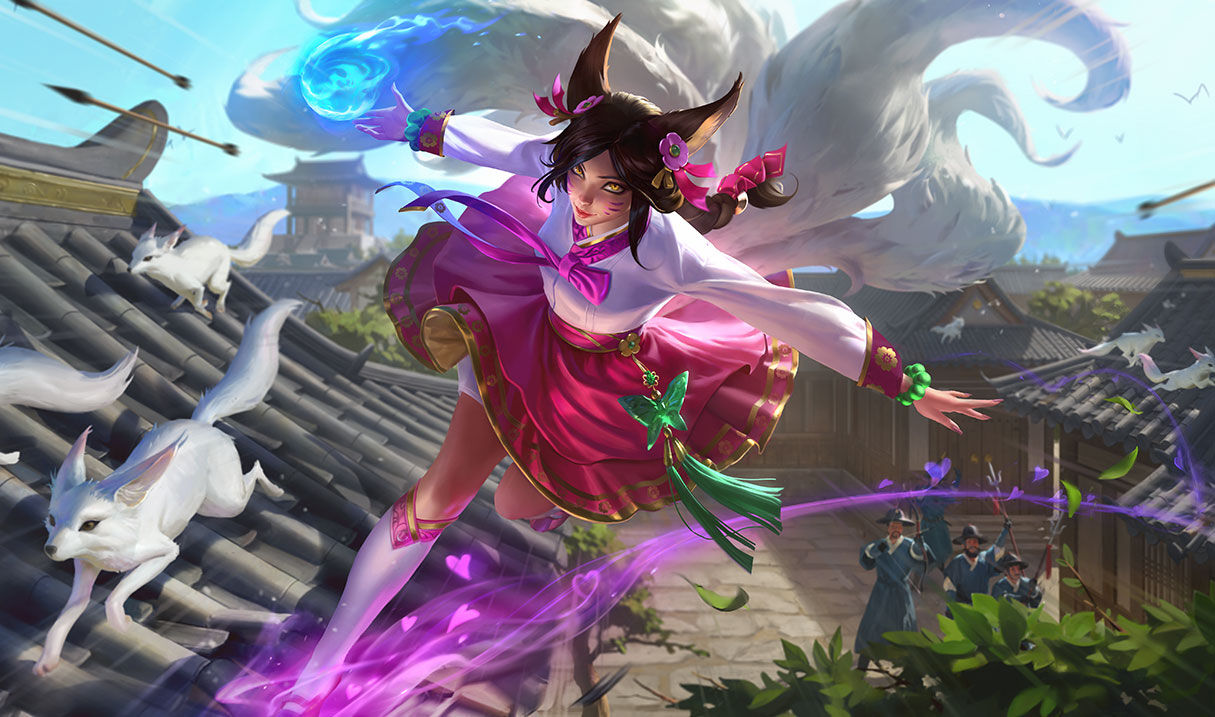 975
14.12.2011
Ahri's dynasty is one of stylish traditional fashion, and wrecking opponents with deadly spirit magic. Why have one when you can have both? 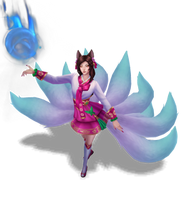 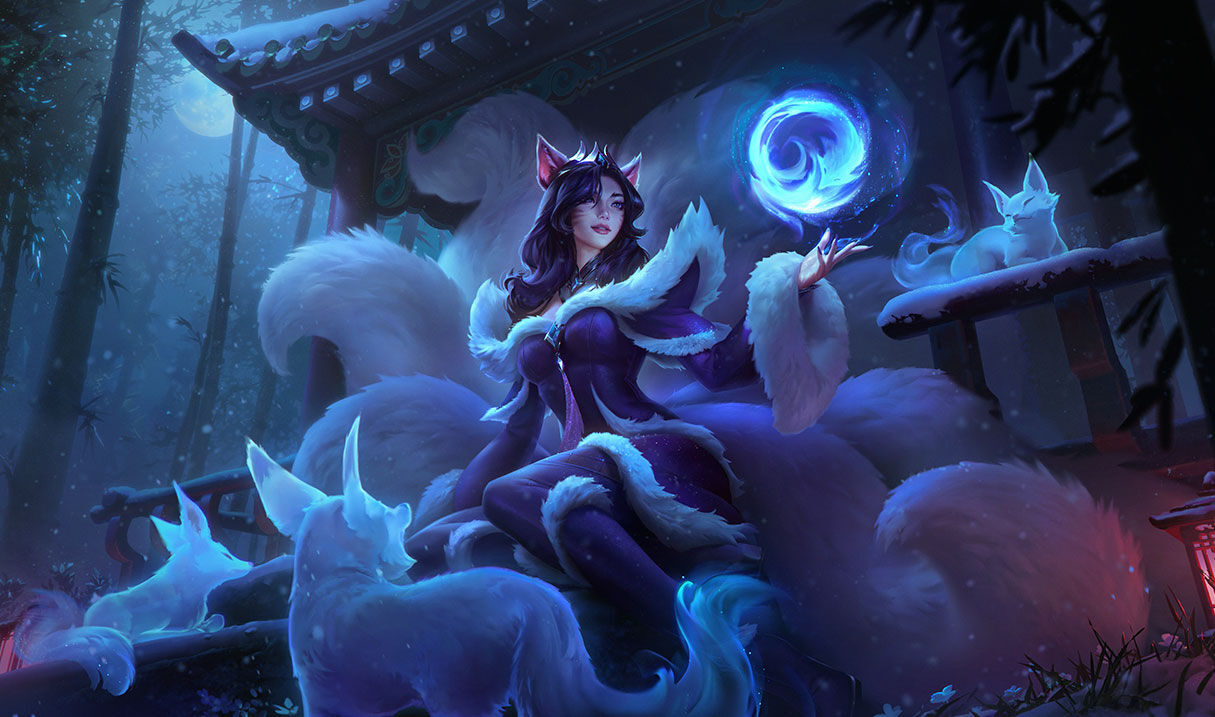 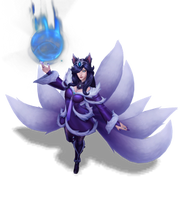 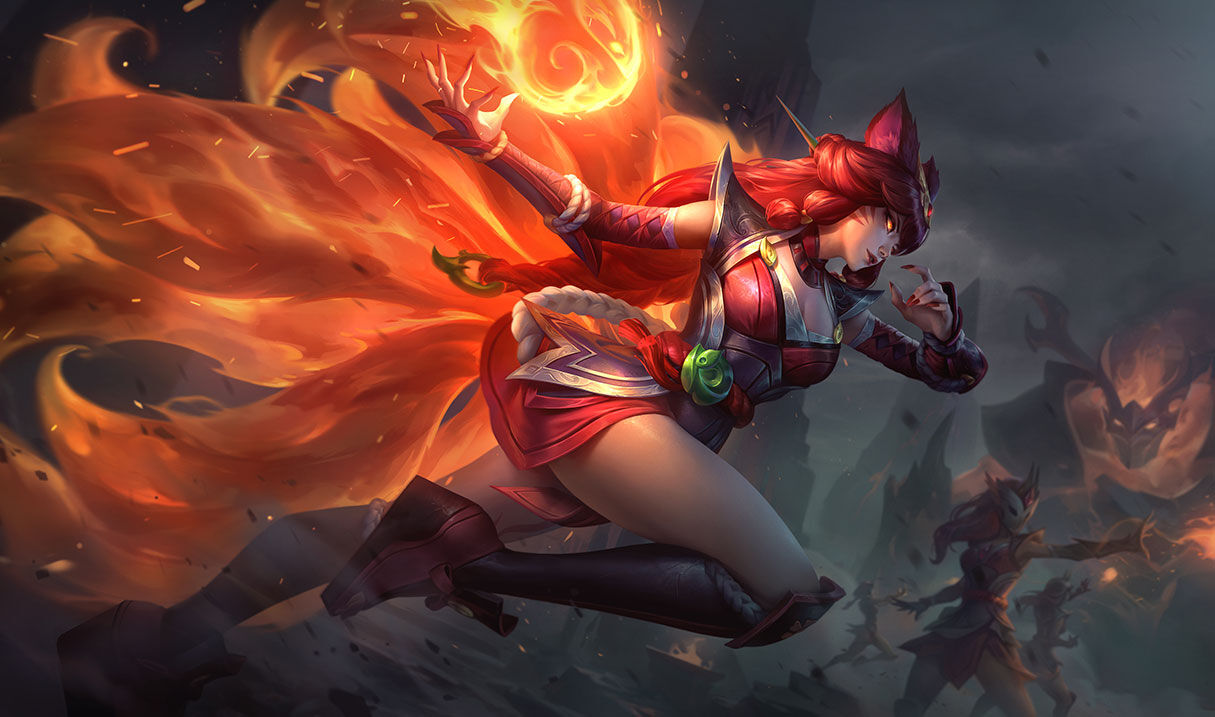 975
11.07.2012
A young, talented pyromancer from the Shadowfire Temple, Ahri gave up her quiet life when a faction of extremists unleashed the burning horrors of the Ashen Lord. Now she uses her fire magic to fight against them, even though all hope seems lost. 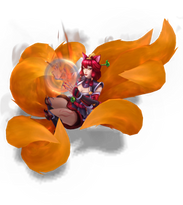 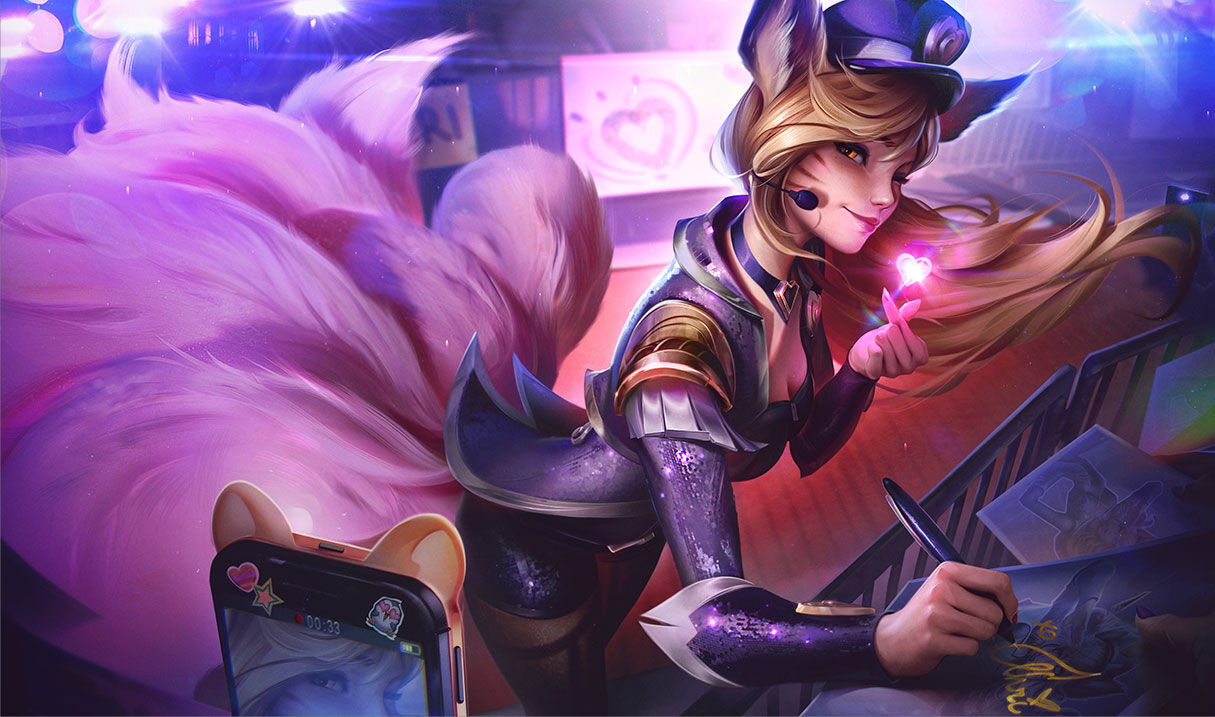 975
25.11.2013
When Ahri's record company discovered her, she was only a teenager, but she had swept the music world like a storm - released five hit singles and won the 2013 Pop Shine Awards. "The Most Talented K-Pop Rookie Award". Then she disappeared as quickly as she appeared, taking time away from the music industry and devoting herself to self-reinvention. 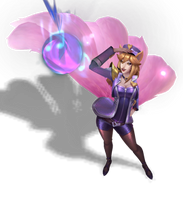 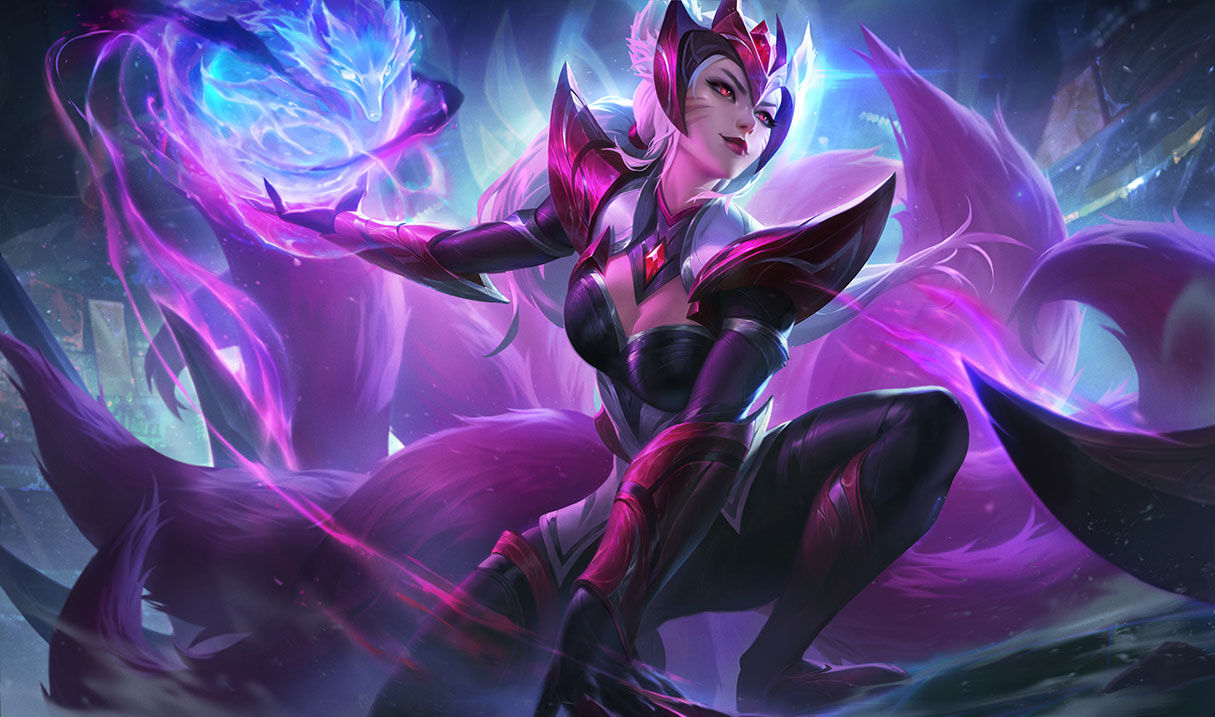 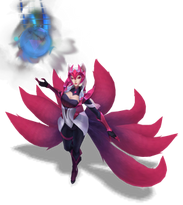 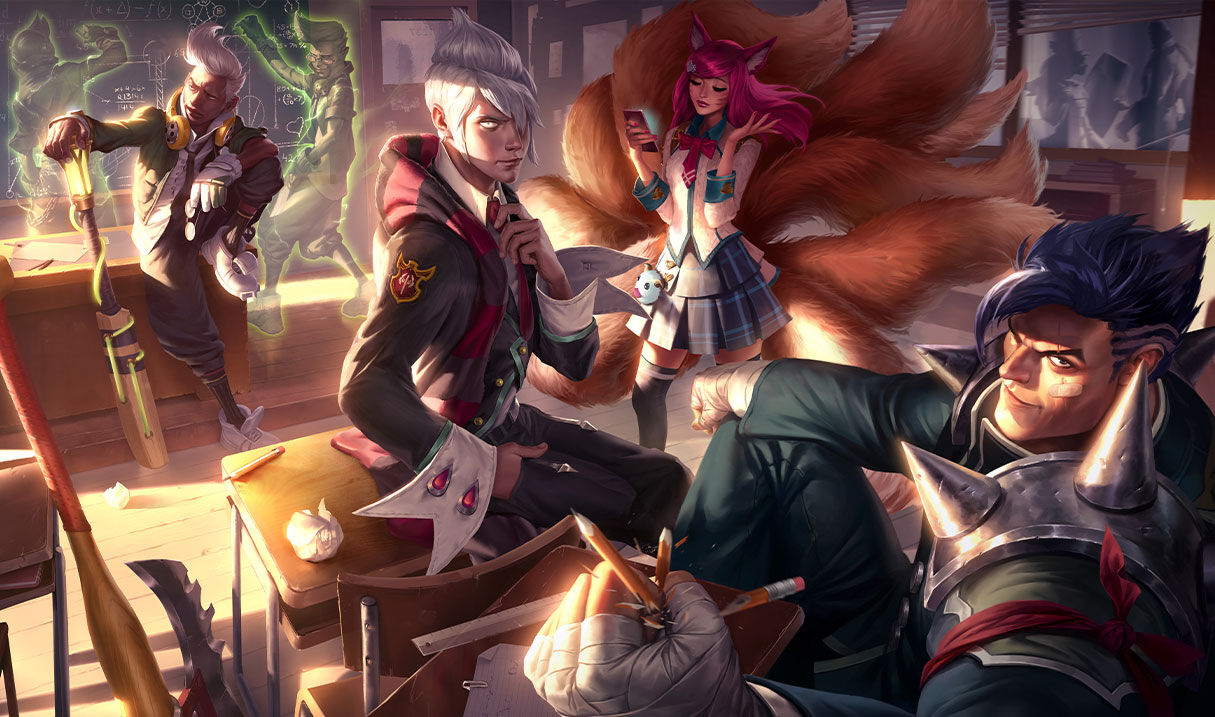 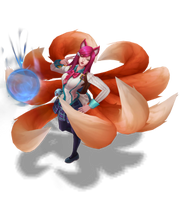 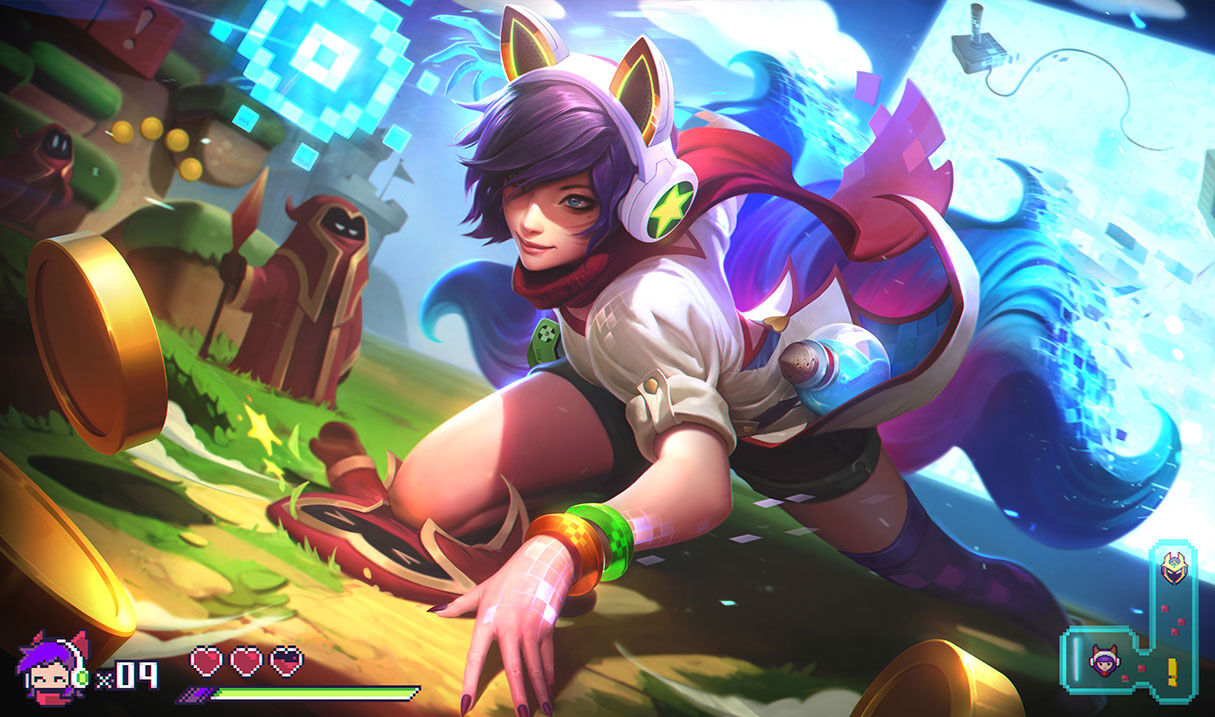 1350
24.08.2016
Owner of the mysterious six-million-point high score in the infamously difficult beat-em-up Demacia Vice, Ahri is a force of nature on the retro battlefields of Arcade World. Dashing between bosses before ripping them apart with her 8-bit magic, she's already earned the nickname “Queen of the Arcade.” 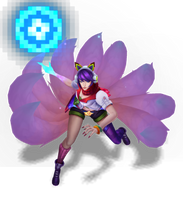 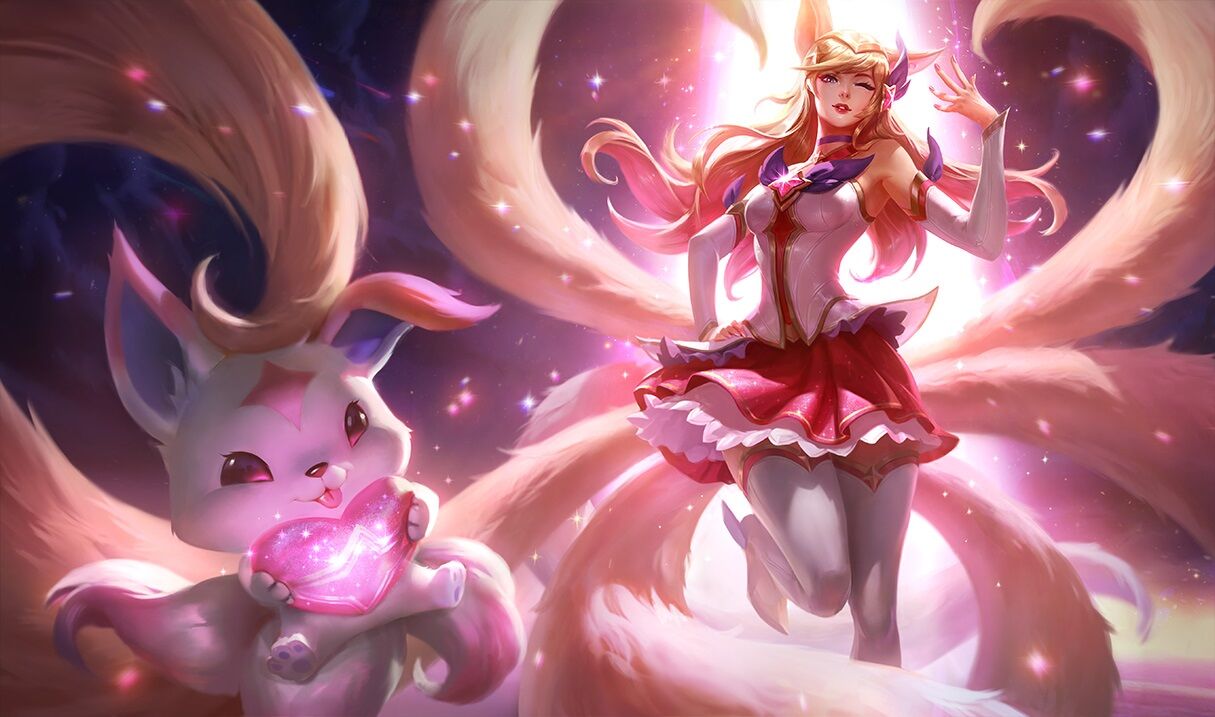 1820
06.09.2017
Ahri is a charismatic team captain who leads her group of Star Guardians from the outer cosmos, with the authority of a queen bee and the sly cunning of a fox. She's effortlessly popular, with an irresistible charm that disarms friends and foes alike. 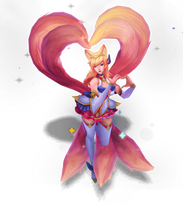 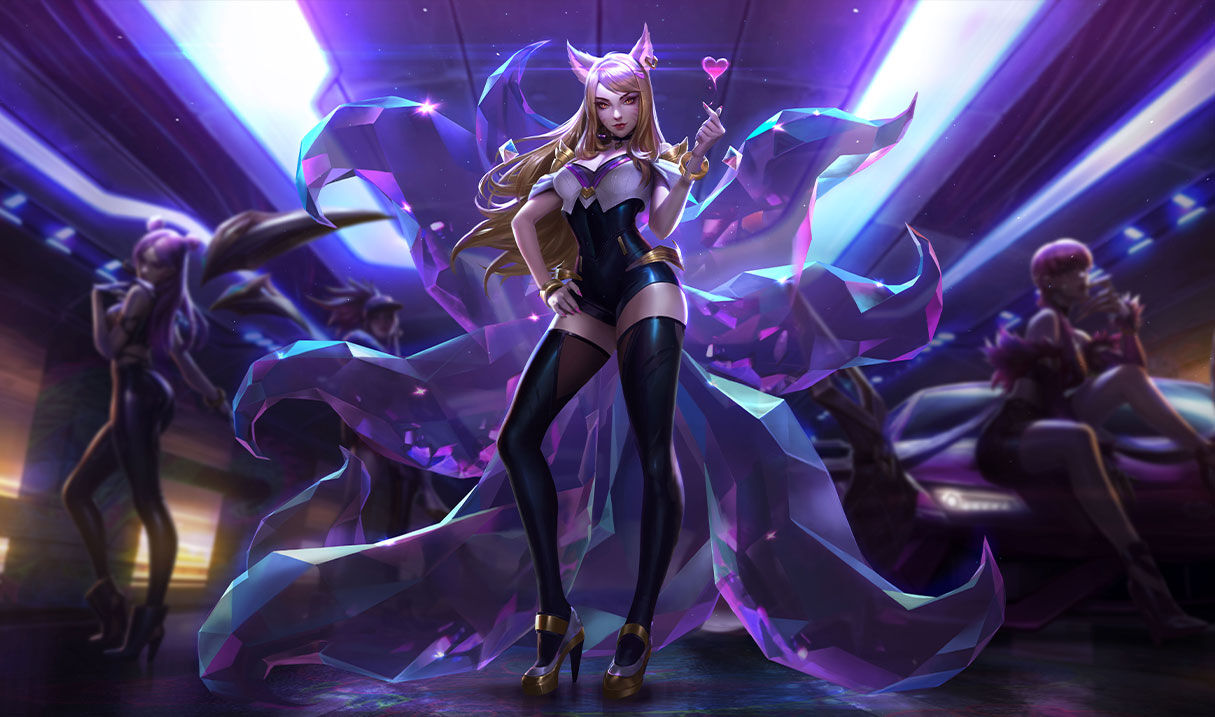 1350
03.11.2018
Setting her old bubblegum pop persona aside, Ahri was determined to shake up her image and reinvent herself as an unstoppable force within the music industry. Five years later, she has returned with a sleek new look and a killer sound—and this time she's not alone. 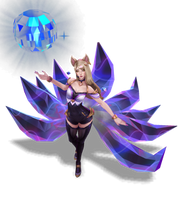 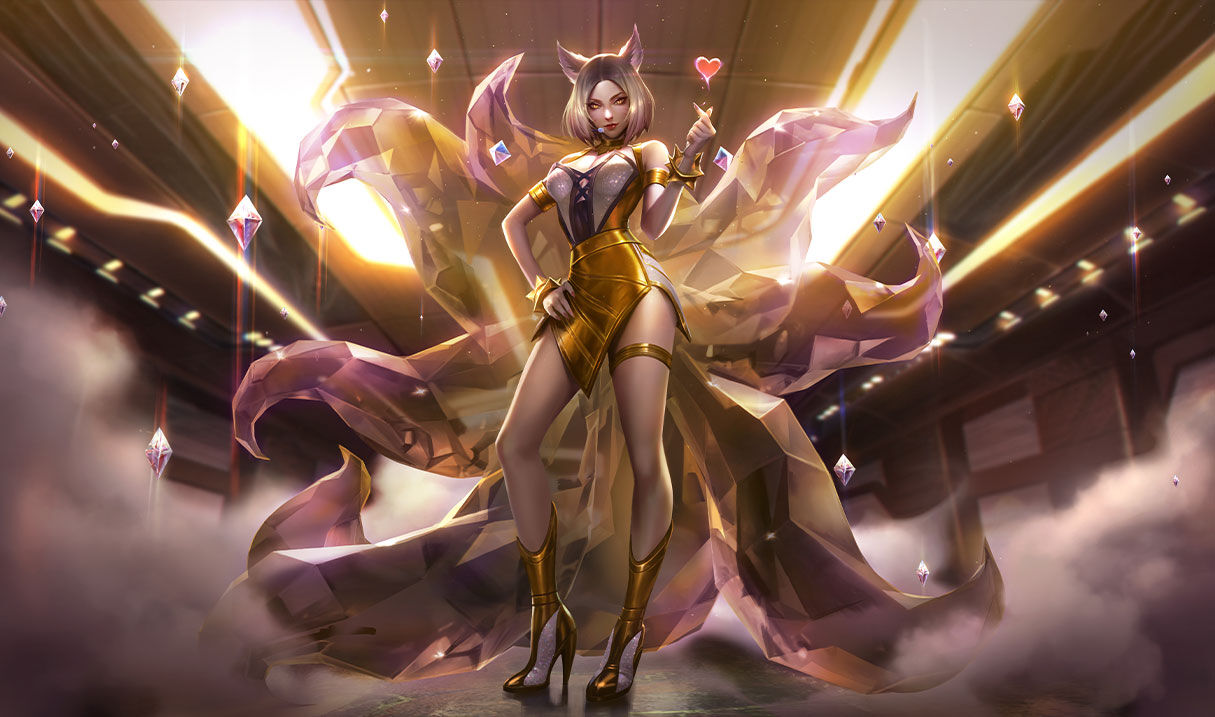 Prestige KDA
View in 3D
Special
07.03.2019
Decked out to dazzle, K/DA Ahri charms her audience in a glittering, golden ensemble specially made for her band's Pop Shine Awards performance. Her Prestige Edition outfit celebrates the golden success of POP/STARS. Can you feel the rush now? 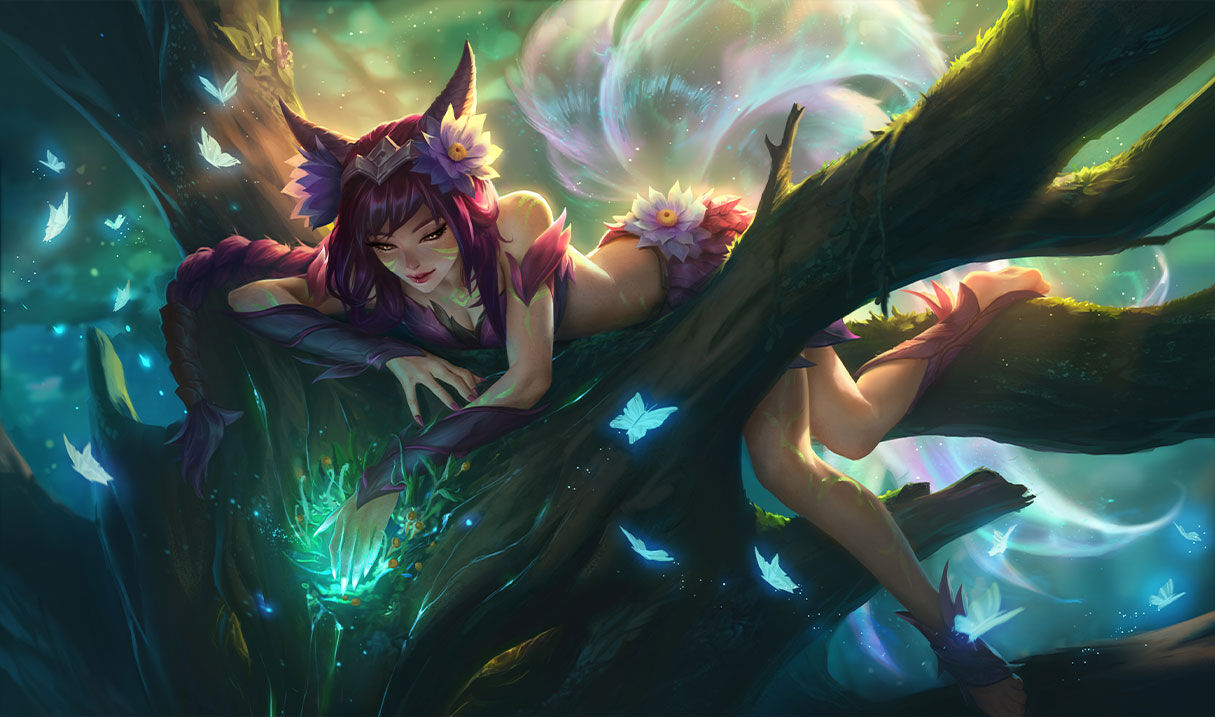 1350
29.08.2019
Fables of the trickster spirit Ahri have been part of mankind's history for countless generations. Fair-skinned and eternally youthful, she is portrayed as a curious, quizzical member of the Elderwood's feyfolk… though in recent years her heart has hardened, as she fights a growing corruption within her ancestral home. 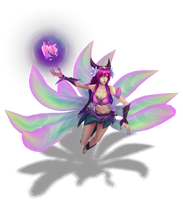 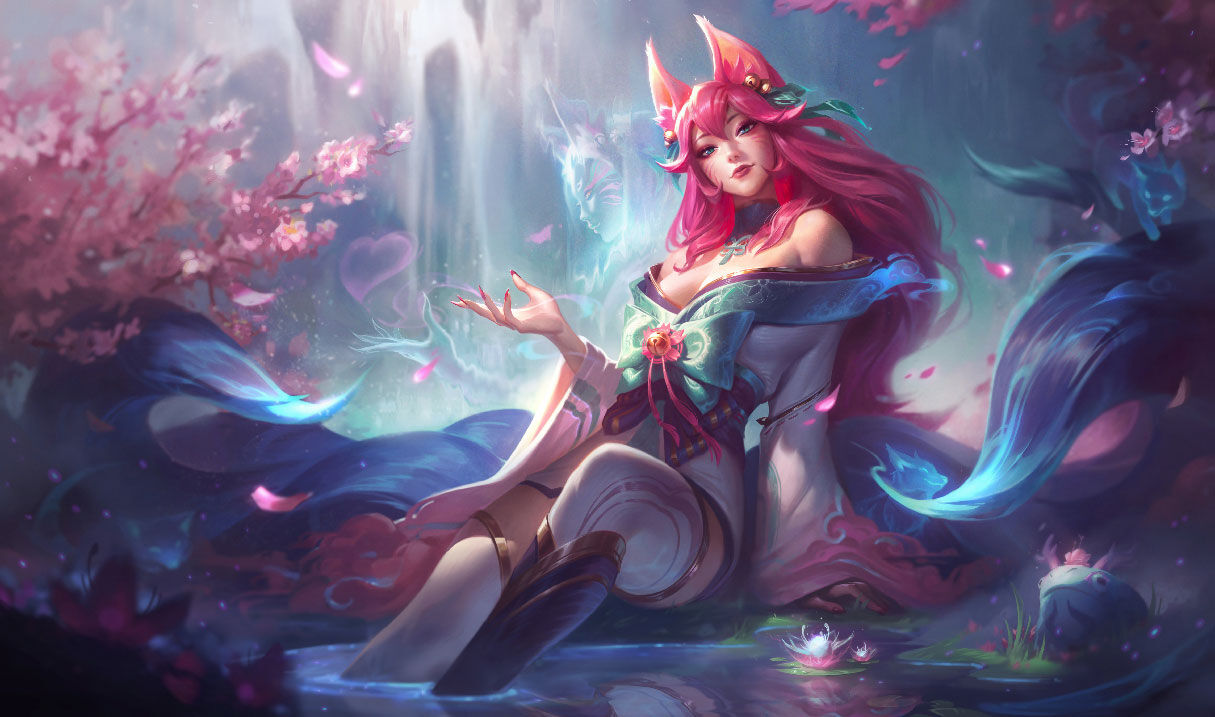 1820
06.08.2020
The famed Spirit of Salvation, and the fox all mortals are beckoned towards when their souls arrive to the spirit realm. A capricious, whimsical spirit who sees the fate of the living as a game of chase, she offers the chance for souls to find their final rest… but will not intervene if they stray from the path. 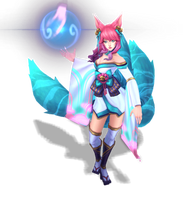 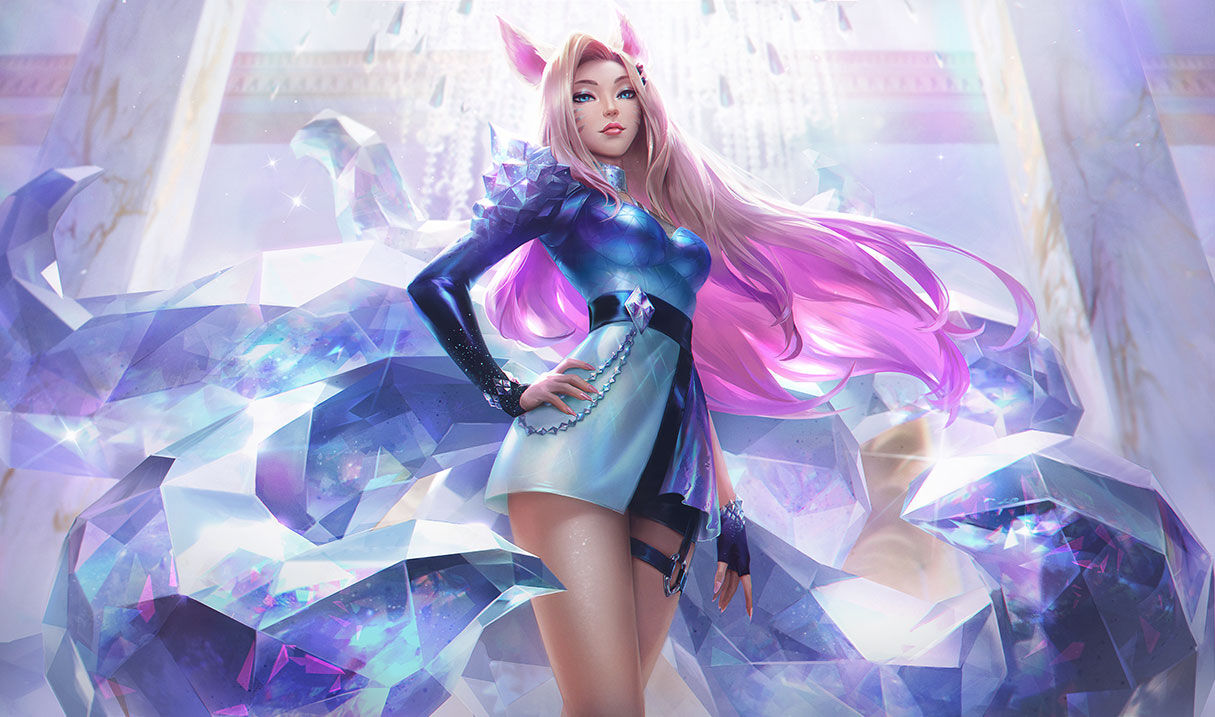 KDA ALL OUT
View in 3D

1350
29.10.2020
When Ahri steps onto the stage to perform with K/DA, she knows she's surrounded by the best of the best—different girls with different personalities, all at the top of their craft. As their leader and as their friend, Ahri is poised to guide these divas to even greater heights and leave their audiences breathless for more.

Chromas
K/DA ALL OUT Ahri Chromas 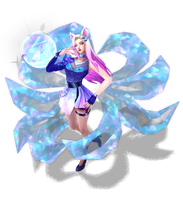 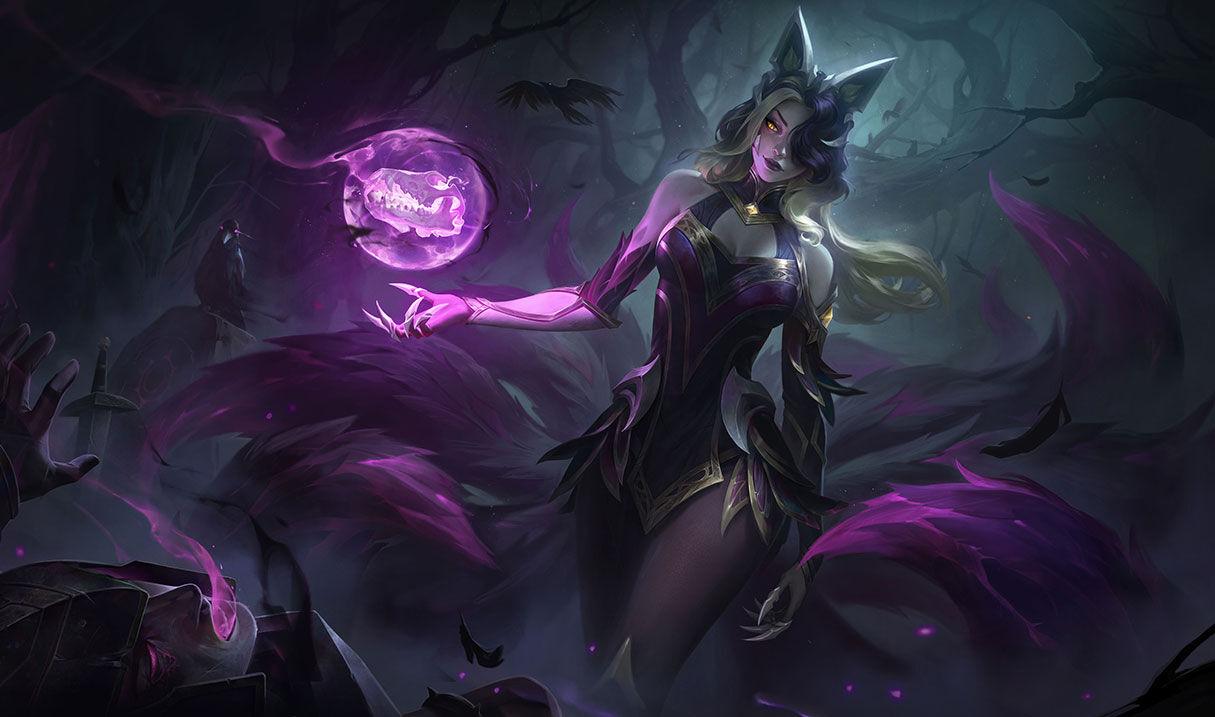 1350
12.08.2021
They came to Ahri at the first stirrings of dusk—the laughter of the Half-Light Jackal, ever stalking the world as it turned towards its own inevitable entropy. A vicious predator and powerful witch, Ahri sucks the life from all she lures close, siphoning it towards her lord within the gloom. 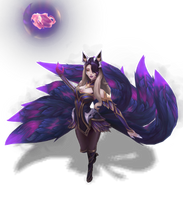