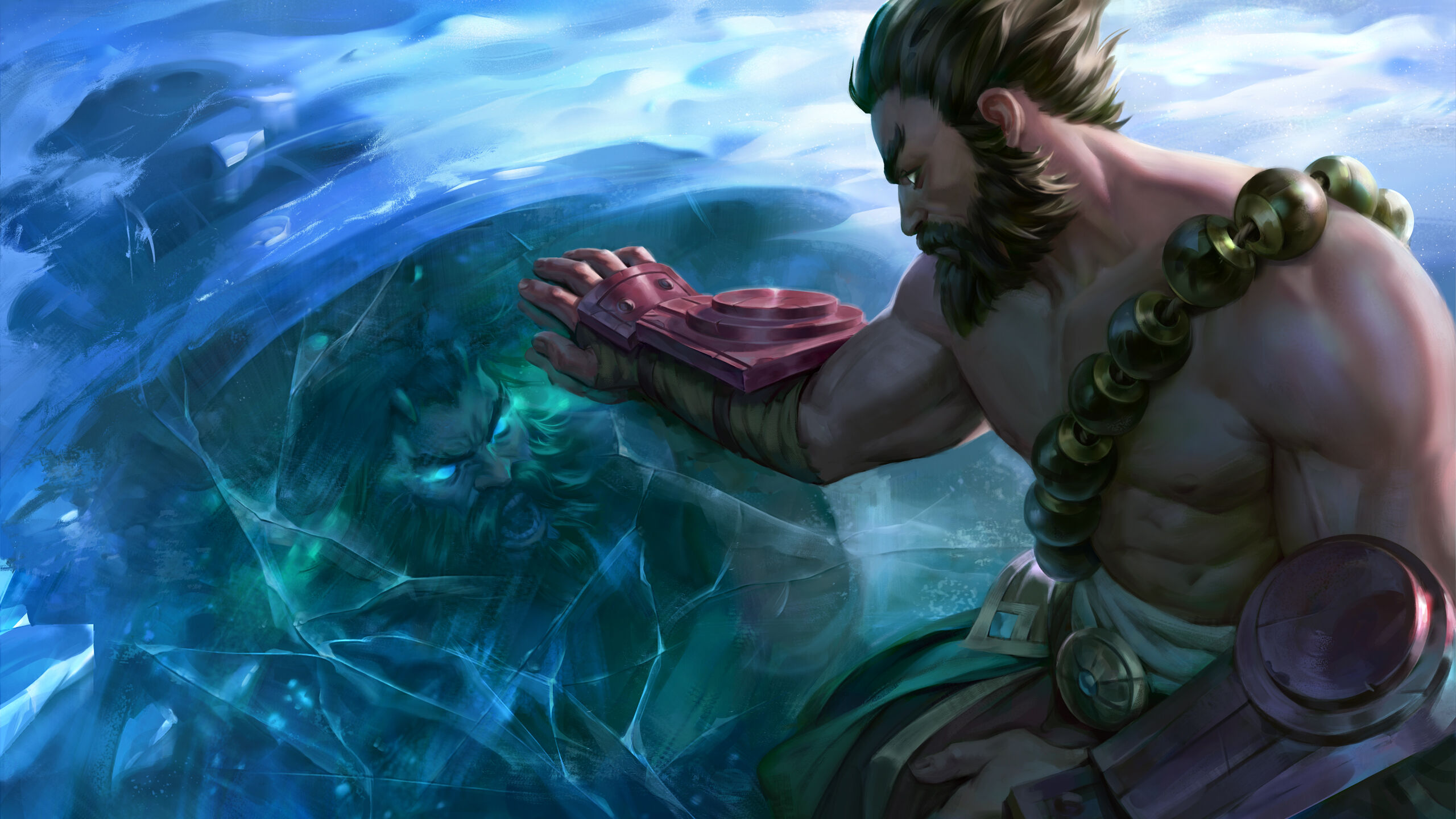 Far above, Udyr heard the cries of an eagle riding the gale.

Far above, Udyr heard the cries of an eagle riding the gale. Its voice was strong, confident, but not close enough to get in the way of his own thoughts. It was a relief to feel this human.

The voices were never silent, but Udyr knew not to be ungrateful. Even a moment’s reprieve was rare.

I can hear myself breathe… for now, at least.

Today, he walked alone. He hiked up the mountain slopes, a chill wind following him, carrying away his lingering memory of

Ionia's ethereal beauty with every gust. The monks at Hirana had offered him a parting gift a few moons past when he left their lands—a riddle intended to guide him on his path to mastering his spiritual powers.

It read more beautifully in their tongue than his own, but it had not taken him long to solve. After spending months traveling with the blind monk, Udyr had learned to decipher the meaning behind Ionian speech.

Reaching the precipitous eastern slopes of Winterspike, Udyr paused to gaze out at the lake before him, frozen in all its majesty. At the edges of the lake laid the bones and corpses of wild beasts, as well as those of dead shamans and priests who had come to this place, months, years, and lifetimes before him.

This land was my home…

He looked down at his reflection on the ice. It showed the face of a man, ragged and worn from his travels.

My rest ends. I hear them coming.

The frigid water bubbled. Slowly to begin with, and then rapidly all at once. Steam rose from the surface, filling the air with heat.

Udyr took in a quiet breath, his shoulders rising, to ready himself.

Out of the mist leapt an ice-formed beast, carved by the land’s magic and birthed from the lake. The ground trembled as it took a thundering step toward Udyr.

Udyr looked up at the wild spirit towering above him, three times his height.

The murmurs started low, soft—leaves falling on fresh snow. Yet quickly, they grew.

Grunts turned into snarls, mutters into barks, one swallowing another. Their rage seized his mind, shattering his every thought. At first, the voices competed for dominance—elnüks, drüvasks, and others. Udyr had heard these voices within himself many times. Soon, they joined together, into the shape he had most feared.

“Spirit walker. Step closer,” it growled. “Raise your voice and show us why you have returned.”

Udyr only just mustered the strength to stifle a gasp. His knees buckled under the weight of the noise in his head. His hands shot toward the soil to steady his body. Straining his neck, he glared up at the savage creature, not willing to answer.

The voices rose at the sight of Udyr’s inaction, with the tiger roaring above the rest.

“You do not deserve to call the

Freljord home. You are weak.”

Udyr braced himself as the spirit rammed its head into him, shards of its icy body cutting into his skin. Tumbling far across the ground, Udyr landed against hard rock.

Regaining his balance, he wiped the blood off his face and forced his hands into fists. He punched his knuckles into the frosty ground, and the throbbing in his arms overtook him. Veins pulsated from his hands to his shoulders. Getting back to his feet, Udyr readied himself to deflect another blow.

The spirit roared once more. “The strong fight! Instead, you stifle your voice and cower!”

The spirit charged headfirst. Udyr tried dodging out of the way, but his foe was quicker and stronger. As he rolled to the side, the tiger swiped his leg with its claws, spraying the spirit walker’s blood across the frosted ground.

Udyr knelt on one knee in pain. He felt his own anger building, but still he held back.

The spirit loomed closer, letting out a feral cry before pouncing toward Udyr. Realizing he could not dodge in time, he crossed his arms before him and clenched his fists. Magical energy surrounded him, blocking the tiger spirit’s lethal blow.

The spirit slid backward. After regaining its footing, it grinned through its fangs. Its icy body crackled with vicious energy, splintering the bones of its past victims beneath its feet. Death was all this place knew.

Udyr knelt on both knees now, his head down, his body pounding with pain while the spirit paced around him. He felt the ground shake with its every step.

The spirit loomed closer, letting out a feral cry before pouncing toward Udyr. Realizing he could not dodge in time, he crossed his arms before him and clenched his fists. Magical energy surrounded him, blocking the tiger spirit’s lethal blow.

The spirit slid backward. After regaining its footing, it grinned through its fangs. Its icy body crackled with vicious energy, splintering the bones of its past victims beneath its feet. Death was all this place knew.

Udyr knelt on both knees now, his head down, his body pounding with pain while the spirit paced around him. He felt the ground shake with its every step.

This is not the way.

He gritted his teeth, their points drawing blood from his lips as he felt the ground tremble once more.

The voices boomed. “The weak… are prey!”

Udyr looked up, seeing the spirit charge toward him, its eyes lusting for blood—so wide he could see himself staring back, with the same lust for violence.

I must embrace who I am.

Golden flames erupted from Udyr’s skin like wildfire, the anger coursing through his body matching the fury of the tiger spirit before him.

“Finally, the prey has decided to fight!”

Udyr roared as he rushed straight at the tiger spirit. Vaulting onto the beast’s leg, he climbed its craggy surface, smashing his bleeding hands into whatever piece of ice he could to pull himself upward. The creature shook, the sharp edges of its body piercing the spirit walker’s skin. Udyr screamed, relishing in his might. At last, his wrath matched the fire in his foe, as the two reveled in their savage violence.

With a brutal lunge, he reached the spirit’s back, trails of his blood dripping down its sides. Spirit energy surged through him, a force strong enough to drown out any pain. The voices of wild beasts clamored unchecked in his mind—the bitter cries of those consumed by the tiger, and his own unbridled anger—merging as one.

Udyr brought his fists down in a flurry of explosive blows, creating a web of cracks running down the creature’s body. He clawed and slashed with abandon, tearing away at his foe. Howling in pure rage, he threw back his head and sank his fangs deep into the spirit’s neck.

He expected the spirit to tumble over, its body to break apart, giant lumps of ice disappearing to dust.

But it was already gone, along with its voices. Had they shrieked? Had they cried?

High above, he heard the eagle call.

Udyr fell and staggered onto solid ground. Breathing heavily, he lay next to the lake, and watched the last of his enemy vanish. Suddenly, he heard another rumbling and stumbled to his feet. The lake, as if celebrating his victory, began to thaw. Piece by piece, the remaining ice melted, raising the water level to wash over the cold, hard land.

Remembering the ritual he had repeated countless times at Hirana, Udyr limped forth. Cupping his hands, he splashed cool water across his head, shoulders, and back, rinsing his wounds clean. Then, gently, he took a drink.

He stared at his reflection, seeing a man looking back. Wounded, tested, alive.

Udyr heard only the sound of flowing water—and yet, he did not smile.

But this fight is far from over.