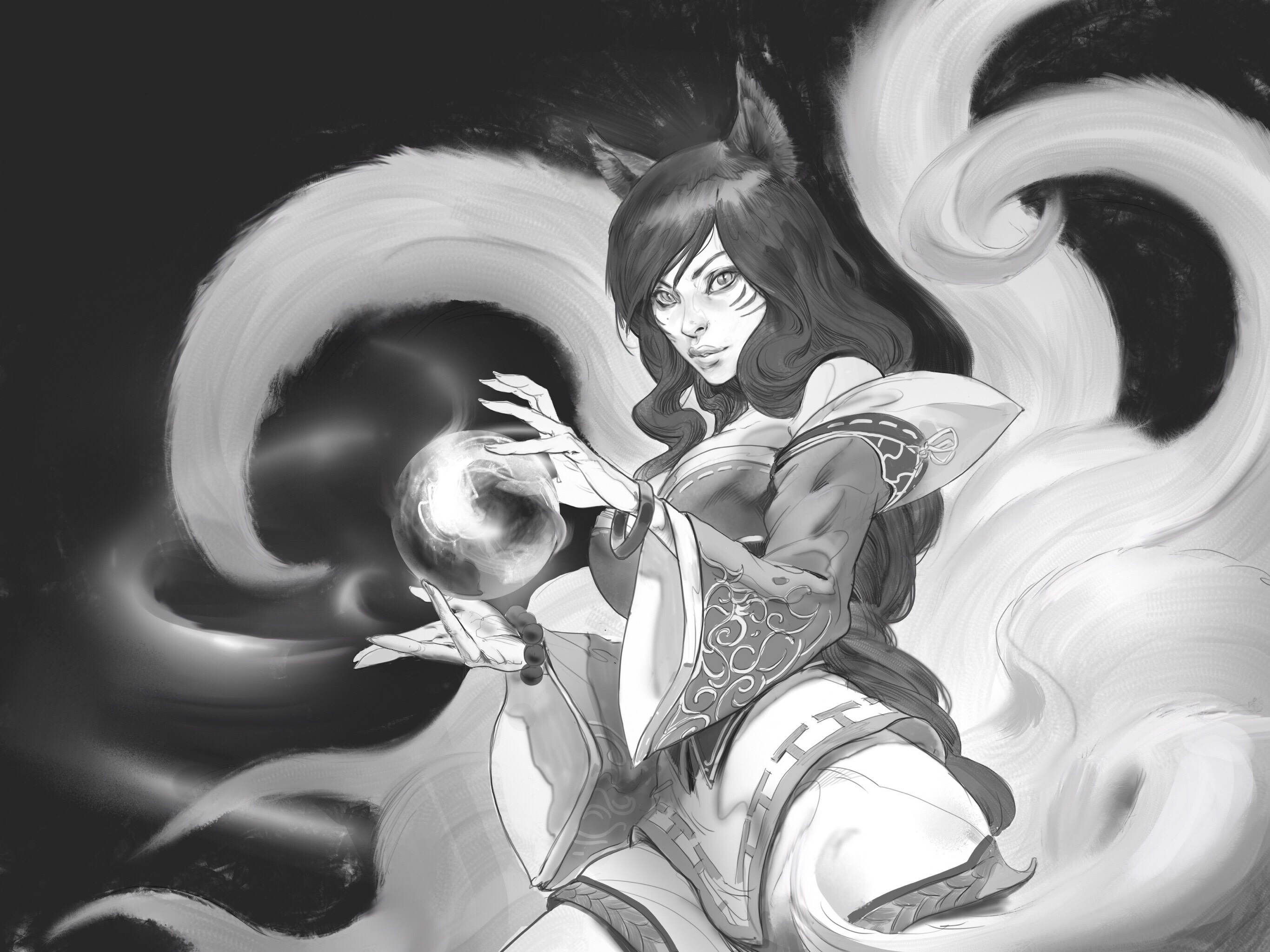 Ahri walks in disguise, but this fortune-teller has her own secret. What are they both hiding?

The market smelled of burning incense and rotting cabbage.

Ahri wrapped her cloak around her nine tails and fiddled with her twin sunstone tokens to distract herself from the stench, rolling them between her fingers and snapping them together. Each one had the shape of a blazing flame, but they were carved in such a way that their sharper edges fit together, forming a perfectly smooth orb. She had carried the golden stones since before she could remember, though she had no knowledge of their origin.

Though Ahri was in a new environment, she was comforted by the latent magic buzzing all around her. She passed a stand with dozens of woven baskets filled to the brim with polished rocks, shells etched with legends from a seafaring tribe, gambling dice carved from bones, and other curious items. Nothing matched the style of Ahri's sculpted tokens.

"Care for a gem to match the blue of the skies?" asked the gray-bearded merchant. "For you, I'll trade a cerulean bauble for the cost of a single cryraven feather, or perhaps the seed of a jubji tree. I'm flexible."

Ahri smiled at him, but shook her head and continued through the market, sunstones in hand. She passed a stand covered in spiky orange vegetables, a child selling fruit that shifted color with the weather, and at least three peddlers swinging tins of incense, each of whom claimed to have discovered the deepest form of meditation. 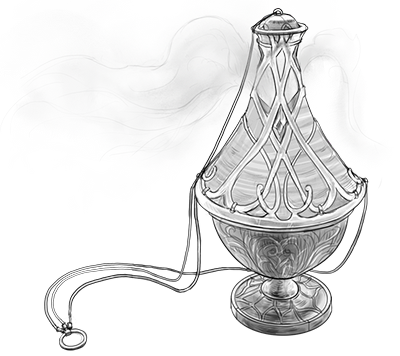 "Fortunes! Come get your fortunes told!" called a young woman with lavender eyes and a soft jawline. "Find out who you'll fall in love with, or how to avoid unlucky situations with a pinch of burdock root. Or if you'd prefer your future left to the gods, I'll answer a question about your past. Though I do recommend finding out whether or not you're at risk for death by poisoning."

A tall vastaya with feline ears was about to take a bite of a spiced pastry. He froze and stared at the fortune teller in alarm.

"The answer is no, by the way. Yours for free," she said, curtsying at him before turning to Ahri. "Now, you look like you've had a dark and mysterious past. Or at least some tales worth sharing. Any burning questions for me, lady?"

Beneath heavy layers of incense, Ahri paused at the scent of wet fur and spiced leather lingering at the woman's neck.

"Thank you, but no," she replied. "I'm still looking around."

"You won't find any more Ymelo tokens in this market, I'm afraid," the woman said, nodding to Ahri's sunstones. "Like the ones you have."

The back of Ahri's neck prickled and she drew closer to the woman. She would not let her excitement get the better of her. "Do you recognize these? Where do they come from?"

"I think they're Ymelos, anyway," she said. "Never seen a pair in person. He only carved a small number in his time, and many of the sets were separated in the war. Dead rare, those."

Ahri leaned closer with each word.

"Do you know where I might find this craftsman?" Ahri asked.

Hirin laughed. "No idea. But if you come in, I'll tell you what I know."

Ahri wrapped her cloak around her shoulders and eagerly followed the fortune teller past her booth, and into a caravan decorated wall to wall with animal skins.

She poured two cups of liquid the color of plum wine, taking one for herself. The tea tasted of bitter oak bark masked by a cloying dollop of honey. Hirin held out a hand for the stones but Ahri kept them close.

"I'm getting the sense that these are special to you," she said with a wry smile. "Don't worry, I have no interest in peddling stolen sunstones. Bad for a girl's reputation."

"Can you tell me where they come from?" asked Ahri, handing them over gingerly.

Hirin held them up to the light.

"These are beautiful," she said. "I don't know how they fit together so perfectly. I've not seen the like."

Ahri said nothing. She stood frozen with curiosity, and did not take her eyes off the woman.

"Legend says the sculptor known as Ymelo collected fossilized lizard eggs from a thousand thousand years ago that he carved into intricate shapes. These ancient lizards lived long before the Ghetu Sea dried up to a desert, leaving only petrified bones and dust."

Hirin coughed, and Ahri detected a bitter note upon her breath, as if she had been drinking vinegar.

"Ymelo stones are designed as small pieces that fit into a larger sculpture," she continued.

The woman dangled the golden pieces in front of Ahri's face.

"Just as your past has left you with information to be desired, these stones may have many more parts that, when combined, create another shape altogether. Who knows what you'll become when you track down your history. With the missing pieces, you may learn more than you'd like."

"Those are pretty words," Ahri murmured, staring at the woman.

After a moment of silence, Hirin chuckled. "Some threads of truth, threads of my own invention. A fortune teller's weaving must be seamless."

The woman retrieved a hunter's knife from a cabinet.

"I weave in just enough of what you desire to make you stay," she said. "'Til the tea slows your muscles, that is."

A low growl escaped Ahri's lips. She would tear this woman apart. She tried to pounce, but her limbs did not obey. She was rooted in place.

"Oh, there's no need for that, lady. I only need a single tail. Useful for a variety of potions, you see, and extremely valuable. Or so I think. Never seen a vastaya with fox tails before. The tea freezes any pain, along with your... mobility."

Hirin wrapped a bandage around one of Ahri's tails. Ahri tried to resist, but she still could not move.

"You'll wake up tomorrow, good as new!" said the woman. "Well, with one less tail. Do you really use all nine?"

Ahri shut her eyes and reached out to the reservoirs of magic around her. The environment had plenty ripe for the taking, but she was too weakened by the tea to draw them to her. Instead, she reached into Hirin's mind, which was far more malleable, and pushed.

Ahri opened her eyes and stared hard into Hirin's. They deepened from lavender to violet.

"Hirin," she said. "Come closer. I would look into the face of the one who tricked me."

"Of course, lady," Hirin replied, transfixed. The woman's voice sounded hollow, as though it came from the bottom of a well.

She leaned in until her face was only inches away. Ahri inhaled, drawing essences of the woman's life from her breath.

...Hirin was a young girl hiding, hungry and afraid, beneath a market stall. Two men argued above, looking for her. She had nothing but empty coffers to show for her days' work...

Ahri continued to drain Hirin's life, sampling memories of raw emotion. They felt rich in Ahri's mouth, and she relished each unique flavor of emotion.

...Hirin told the fortune of a witch doctor shrouded in veils, receiving a copper for her troubles. She used the coin to buy a piece of bread, which she devoured in seconds...

...In a seedy tavern, a raucous group played cards. A man with eyebrows resembling butterfly wings gambled a golden Ymelo stone while Hirin watched from the shadows...

...Hirin tracked Ahri as she walked through the market. One of her fox tails peeked from beneath her cloak. She drew the vastaya into her caravan---

Ahri stopped, her head spinning with renewed vigor. With each memory she stole from Hirin, she felt energy rush back into her weakened muscles, cleansing them of the poison.

Strengthened once more, she slowly shook her limbs awake, and flexed her tails with a shiver. They tingled with pinpricks.

Hirin stood wide-eyed and dazed, still very much alive. It was she that would wake tomorrow, good as new - less a few memories that she would not miss.

With knowledge of the woman's life, Ahri's rage had faded. She brushed her hand against the fortune teller's cheek, then wrapped her cloak tightly around her shoulders and stepped out into the sunlit market.

Hirin would not remember her or their encounter. But Ahri had left the trade with a name to hunt - Ymelo - and the image of the man with soft-winged eyebrows was burned in her mind. 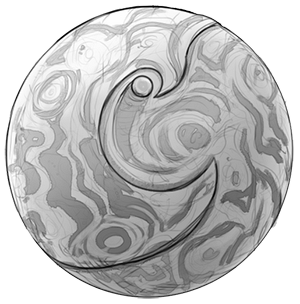