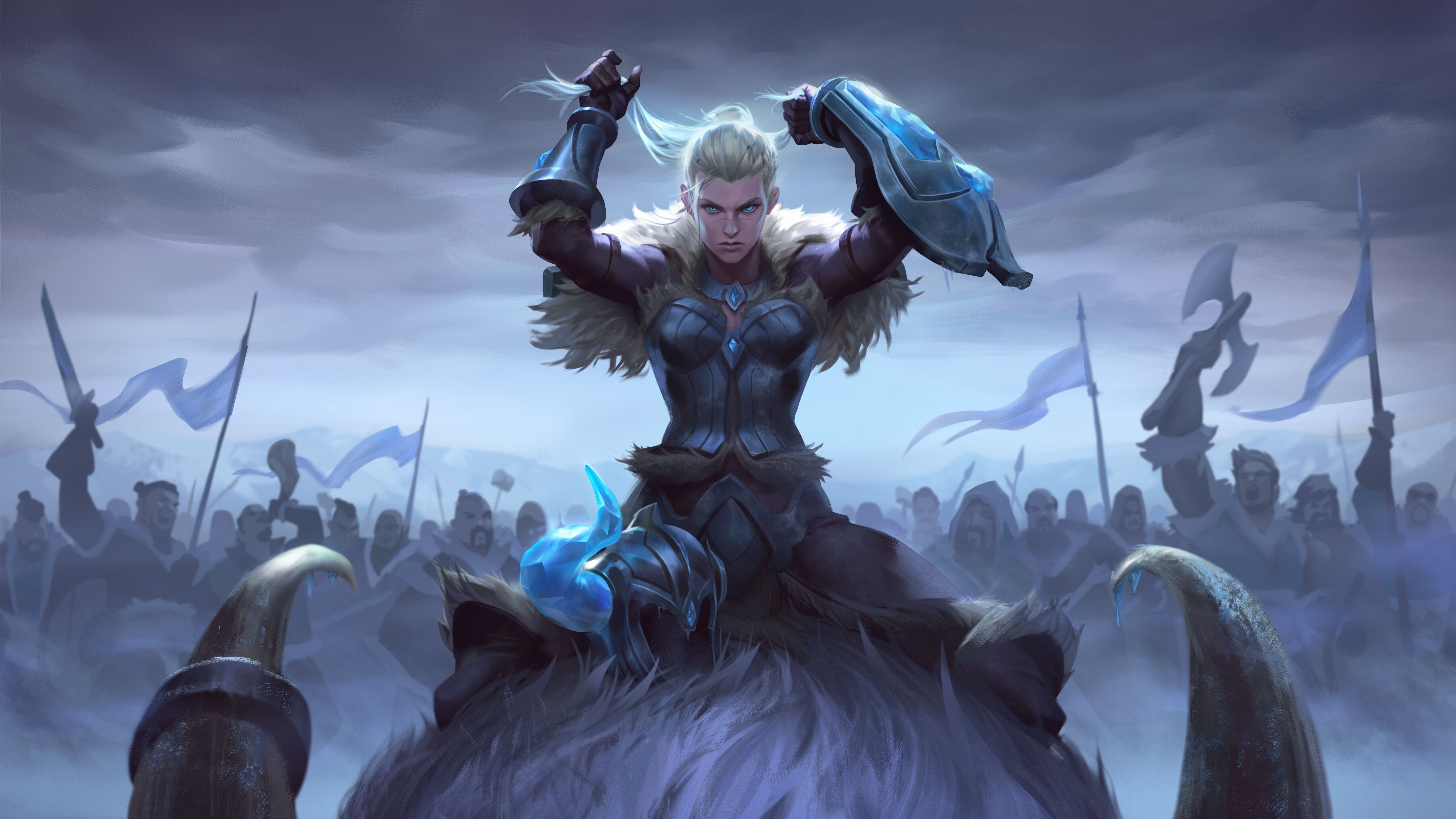 Sejuani slammed the axe into the tree's trunk. It had taken her five hits to fell it, and hacking down a dozen trees had winded her. Iceborn were strongest in the cold, and the southern heat was sapping her strength.

Her weary reavers cheered. Though only a hundred strong, their roar echoed off the hills.

The time for stealth had passed. The southerners had gathered an army of many thousands and were less than a half-day behind. On the surrounding hilltops, enemy scouts watched.

The main body of Sejuani's forces were in the far north occupied by the summer: fatting herds, fishing, and hunting. She had scattered small war parties along the Demacian border to destroy towns, burn crops, and wreck keeps. Hoping, when winter came, her full horde could smash through these weakened lands and raid further south.

Scarmaiden Kjelk approached Sejuani. Like the rest of the raiders, she rode a drüvask, a boar-like creature larger than any ox.

“Warmother, enemies gather on the other side of the river!” Kjelk said, bringing her monstrous mount to a stop.

“Show me,” Sejuani replied, leaping onto her own drüvask, Bristle. He was twice the size of his peers and as wide as a mammoth.

Together they rode down the hillside, passing warriors lashing the logs into rafts. She followed Kjelk along the riverfront until sweat dampened their mounts' backs.

Downstream of a waterfall, just three hundred paces across the river,

Demacian skirmishers were exiting the forest that had hidden them and climbing down the bare rocks. It was an advanced flanking force of a few hundred archers and spearmen. They spotted the two Freljordian women on their drüvasks, but continued on their path.

“Svaag!” Sejuani spat at the flowing water in front of her. In winter, bogs, lakes, and rivers like this one became frozen highways for her fast-moving warbands.

A horn sounded, and Sejuani needed no scout to tell her that the main force of the enemy army had arrived. She turned and could see their armor glimmering on the hilltops behind them. The Demacians' plan was clear.

If her warband tried to cross the river on rafts, the enemy skirmishers would rain missiles onto them, cutting her numbers in half. Then, using the high ground just beyond the riverbank, the spearmen would be able to hold her survivors long enough for the main force to catch up and overwhelm them.

Bitter and raging, Sejuani kicked Bristle onward and the giant beast ran, crashing through underbrush and shallows back to where the rafts waited.

Most of the warriors had already spotted the enemy forces and were preparing to flee along the river's edge. A fear had gripped them—not of battle, but of the trap the southlanders had sprung.

“The enemy will send riders to block off any escape along the riverside. We cannot stand against the army coming down from the hills. We must cross. Now,” Sejuani commanded.

Sejuani took a small piece of wood wrapped in leather, no larger than her thumb, and slipped it into her mouth. Then she uncoiled her great flail, Winter's Wrath. Each link of the weapon's chain was as large as a man's hand. At the chain's end hung a massive shard of True Ice, the largest most had ever seen. Misty vapor rose from its magical cold.

Sejuani clamped her teeth down on the leather-wrapped stick to resist the pain of the weapon's magic. For wielding True Ice always had a cost. Its cold frosted her arm, sending her into agony. Her eyes watered and tears froze like diamonds on her cheek. Yet all her warriors saw was a grimace of certainty and rage. She swung the weapon around her before crashing it into the water.

A bridge of ice formed, but—as she had expected—it immediately broke apart in the warmer currents. It could not hold her war party.

A few arrows began to fall from the other side of the river, archers testing their range. Few reached land, but she could hear the southerners' jeers.

Sejuani set Winter's Wrath back, spat out the stick, and removed her helmet. Then she unwrapped the wolf-gut twine on her wrist. Seeing this simple act, her men roared in approval.

A barking chant began. The warriors, no longer afraid, knew now they were witnessing something special. Sejuani was making the most sacred oath of her people.

She would tie a death knot.

She uncoiled her braids and deftly ran the wolf-gut through her hair. She wondered how many times she had taken a death oath. A dozen? More than any warrior known. Eventually she would fall or fail. Would it be today?

Arrows began to hit the shore around her as she bound the knot. A few of her warriors fired bolts back at the enemy, but the wind was against them.

“I am Sejuani, Warmother of the Winter's Claw! I am the Winter's Wrath! I am the Flail of the Northern Winds!” she cried as she tied the last triangular knot into her hair. “Even in death, I will hold the riverbank until you safely cross. This is my oath! I see the

Her warriors cheered, voices growing hoarse as they tried to hold the sound longer. Many had eyes wet with emotion, for Sejuani had sworn to save their lives, even at the cost of her own.

She did not need to give them any further orders. They readied their weapons and climbed onto rafts. They would cross as quickly as they could—and perhaps they might arrive in time to save her.

Sejuani placed the leather-wrapped stick back between her teeth. She ran her fingers through the wiry hair on Bristle's neck, who needed no oath or words to understand her intent. He grunted and turned to face the water.

Again she grabbed Winter's Wrath and swung it. Exhausted, in pain, and sweating in the heat, Sejuani brought it down onto the water...

A bridge of ice formed as Bristle charged. The ice cracked and tilted, but her steed somehow ran true.

Arrows fell; not the few exploratory shots from before, but a black rain. Sejuani held her shield high, though a few still stabbed her shoulders and thighs. Dozens pierced Bristle's hide.

Then, barely halfway across the river, the bridge collapsed, and they were in the water.

Bristle struggled. Desperately, he tried to hold them above the surface. Still the arrows fell. The distant shore was gone. All Sejuani could see was a rain of black bolts and the water red from Bristle's blood.

The great beast was screaming—with a sound like a thunderstorm and a baby wailing. Bristle sputtered. Without thinking, Sejuani leaned over, protecting his torso with her own. Her shield covered his face to ease the mount's suffering.

It was then she thought, Perhaps our death comes today.

Suddenly, Bristle found his footing in the shallows. Instead of drowning, the great beast made huge splashing strides onto the riverbank.

Sejuani stood in her saddle and swung her flail in front of her, releasing an explosion of ice. The blast cut apart a dozen unarmored archers. Bristle gored and trampled another two. The others ran from her, back uphill, seeking cover behind the spearmen who formed a shield wall to block her next attack. More missiles would rain down and the spearmen would charge her in mass momentarily, but Sejuani grinned, knowing the archers had lost their opportunity.

She looked back to see her own warriors crossing, unharried by the barrage she had just weathered. Sejuani still did not know if she would survive this day, but she had not failed her oath or her people...

And that is what mattered.

Lore and Events
Retrieved from "https://leagueoflegends.fandom.com/wiki/A_Death_Knot?oldid=3091618"
Community content is available under CC-BY-SA unless otherwise noted.