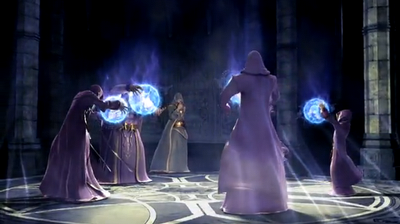 ※翻訳お願いします
Ancient battles between Protectorate (Stag crest) and Magelords (Owl crest) summoners waged on the field known as Summoner's Rift. Helped by Aatrox a mysterious figure, the war between both sides has changed the landscape and mutated the local flora and fauna. Now a the battlefield is littered with the ruins of both sides and is a residence of a powerful Dragon Dragon and Baron Nashor Baron Nashor.

In modern times, summoners are types of magic or non-magic users that summon minions, monsters, or structures for their use. Most summonings are done by magical means by the use of mana, or by the use of powerful artifacts. Bilgewater Serpent Callers use hollowed out pillars to mimic the screams and screeches of the denizens of the deep, summoning them to the surface or chasing them away. One such serpent was called upon during one of the recent Harrowings to aid Bilgewater against the undying hoards onslaught.